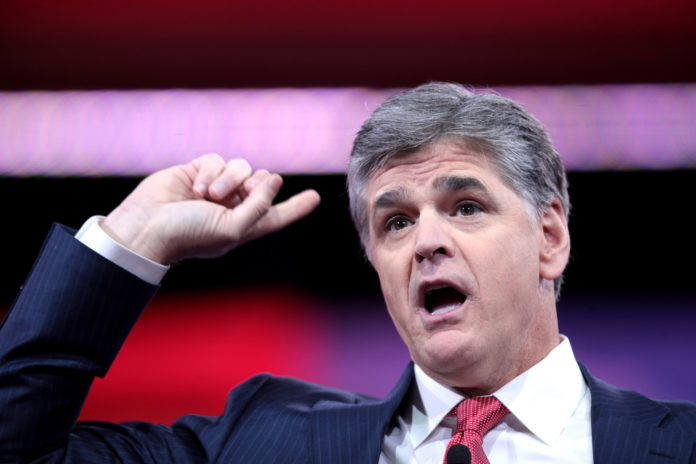 Ever since Robert Mueller was appointed as special counsel to investigate Russian interference in the 2016 election, Fox News, in conjunction with the White House, has been trying to discredit every move Mueller and his team of investigators makes.

Now, with Mueller drawing ever closer to the Oval Office and top aides to President Donald Trump, those who support the administration are resorting to fear and threats to try and forestall the inevitable.

On his radio show Monday afternoon, Sean Hannity warned that if Mueller finds anything that implicates the president, it could lead to a “civil war” in the United States:

“This country is headed towards a civil war in terms of two sides that are just hating each other and if Robert Mueller wants, there’s a big red button in the middle of the table. And if Robert Mueller is so pompous and so arrogant and so power hungry and so corrupt that he’s going to hit the red button and he’s going to ignite a battle that we’ve not seen in this country before.”

In other words, if Mueller does his job and reports the facts, there’s gonna be trouble. As for Mueller being “pompous” and “arrogant,” it’s quite clear that Hannity is thinking of Donald Trump when using such pejoratives.

Oddly, Hannity then tried to dial back his violent rhetoric, adding:

“You think it’s, and I’m not talking about a war, I’m talking about, in terms of, there’s going to be two sides of this that are fighting and dividing this country at a level we’ve never seen and you’re going to basically have two sides in America, those that stand for truth and those that literally buy into the corrupt Deep State attacks against a duly elected president and that’s what it’s going to be.”

Aren’t there always two sides to any issue in the political forum?

Hannity screams about “truth” and a “duly elected president,” and yet his precious Donald is the biggest liar in the world, and we don’t yet know if he was elected fairly or with the help of a hostile foreign government.

After realizing he’d gone too far, Hannity tried to tempter his rhetoric with this tweet:

So now Lazy @mediaite is cutting and pasting at MMFA? Aligning with https://t.co/ULl5KqmhmN? You forgot when I said the “civil war” will result in families throwing mashed potatoes at each other. CONTEXT! https://t.co/YT7ZL2enCn

How do we know Mueller is on the right path? Because conservatives and Trump himself are constantly whining, squawking, and complaining.