The United States Blues
Home News SNL Hilariously Shows Trump What Life Would Be Like Without Him As... 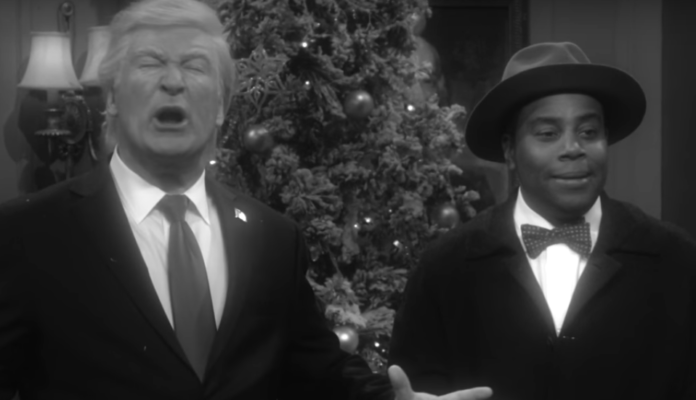 “Saturday Night Live” swung for the fences this weekend with a parody of “It’s a Wonderful Life” to show President Donald Trump what life would be like if he had never been president.

Trump, as played by Alec Baldwin, looks down in the dumps due to all the investigations against him and his inability to get what he wants while being hated by most of America. That’s when the angel Clarence, played by Kenan Thompson, drops by to show him how things could have been.

The classic black and white scene takes place at a Christmas party with several of Trump’s family members, former and current associates and his perceived enemies showing up to explain what became of them after Hillary Clinton won the election in 2016 because she “visited Wisconsin one time” and her emails were nothing but coupons.

For instance, Sarah Huckabee Sanders showed up all happy because instead of lying for Trump every day, she’s doing PR for companies like Facebook and Ashley Madison.

Kellyanne Conway got her soul back.

“I’m no longer eaten from within by lies,” she says. “After we lost the campaign, the devil gave my soul back.”

Trump’s wife Melania divorced him and improved her speaking skills because she’s no longer around someone with a fifth-grade vocabulary.

Eric Trump somehow got a little smarter. And Mike Pence is happier as a DJ.

Michael Cohen, played by Ben Stiller, then shows up much to Trump’s surprise.

“Shouldn’t you be in jail after you flipped on me?” Trump asks.

“What? I would never, ever flip on you,” Cohen replied. “You’re my best friend. And, since it’s Christmas, I just want to say: ‘You taught me everything I know.’ It’s true. Everything single thing I’ve done is because you directed me to do it.”

And Trump got his Trump Tower in Moscow.

Even Special Counsel Robert Mueller, played by the great Robert DeNiro, is happier without Trump as president because he can spend more time with his grandson.

“I’ve been spending so much more time with him since I don’t have to investigate some idiot for treason,” he observed.

However, instead of learning the lesson Clarence was trying to teach him, Trump apparently decided that there was too much happiness in the country and the world.

“The world does need me to be president after all,” he said.

“Yeah, that was not the lesson at all,” Clarence replied.