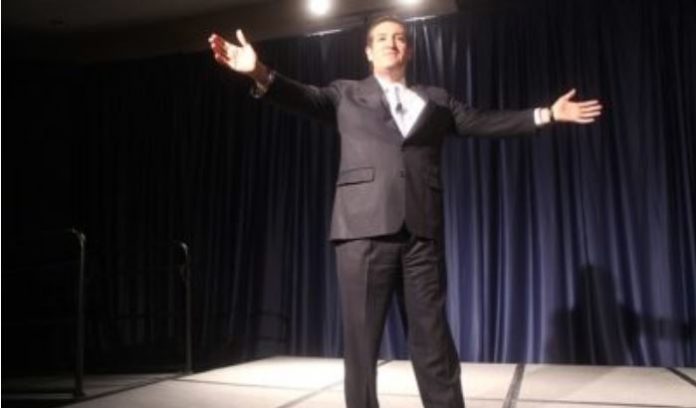 Senator Ted Cruz has drawn a ton of Internet mockery after introducing a bill that would force the U.S. government to use $14 billion of assets from Mexican drug cartel boss El Chapo to pay for President Donald Trump’s border wall.

The notorious drug lord was convicted in federal court this week on all ten counts and prosecutors are now seeking his $14 billion in assets as reparations for his various crimes, which could then be used to fund Justice Department expenses accrued during the investigation or pay for other Justice Department activities.

But Senator Ted Cruz (R-Texas) wants to strip that money from the Justice Department and use it to build Trump’s wall.

America’s justice system prevailed today in convicting Joaquín Guzmán Loera, aka El Chapo, on all 10 counts. U.S. prosecutors are seeking $14 billion in drug profits & other assets from El Chapo which should go towards funding our wall to #SecureTheBorder. https://t.co/hPwEUVM6SP

Cruz even named it the El Chapo Act.

Cruz would go on to release a statement on Tuesday in an effort to justify building the wall with El Chapo’s drug smuggling profits.

“Congress has a clear mandate from the American people: secure the border and build the wall,” Cruz said in a statement according to CBS News.

“Ensuring the safety and security of Texans is one of my top priorities. Indeed, I have long called for building a wall as a necessary step in defending our border. Fourteen billion dollars will go a long way to secure our southern border, and hinder the illegal flow of drugs, weapons, and individuals. By leveraging any criminally forfeited assets of El Chapo and other murderous drug lords, we can offset the cost of securing our border and make meaningful progress toward delivering on the promises made to the American people.”

The problem is that not only does the bill ignore the appropriations process, it ignores the fact that the American people overwhelmingly oppose Trump’s wall and that a wall will NOT stop drugs from being smuggling into the country.

Even El Chapo’s own story refutes Cruz’s claim that a wall will stop drugs, as multiple Twitter users informed him in a flurry of mockery.

Um… His drugs were smuggled in via cars & trucks through ports of entry, on boats & ships, by air…what good is a damn wall going to do? How about getting people OFF THE DAMN DRUGS IN THE FIRST PLACE? Capitalism 101: no demand, no money to be made!

So you are going to use the money he made smuggling drugs with tunnels, planes and submarines to build a wall to stop his cartel? That will teach them.

“I keep getting bit by snakes in that grassy field”
“Here, we got you a lifetime supply of sunscreen to help prevent that from happening”

Dude. A wall wouldn’t have stopped El Chapo’s drugs from entering the country.

I’m sure you know this. You’re just hoping your fucking idiotic supporters don’t.

Does everyone know he broke out of maximum security prison by digging a tunnel?

Or help less fortunate families get back on their feet. Or fix the foster care system. Or combat unequal pay gap. Or work towards more affordable healthcare. Or anything of actual use to our country. Why are we trying to combat the problems Mexico brings us. America First?

So let me get this straight. Ted Cruz wants to use money seized from El Chapo to fund the wall. The same El Chapo whose cartel smuggled drugs via planes, fishing boats, cars, submarines, tractor-trailers and trains at legal points of entry proving that a wall would be worthless. https://t.co/KI2L2vUcZ4

.@TedCruz-Your idea of taking money seized from El Chapo and using it to build a wall, is your dumbest idea since you decided running for President would be great for you. Go back to being Trump’s little spineless puppet. Thanks.

After all, the same guy you reference, El Chapo, owned planes. Submarines. Catapults. Tunnels. None of which would be in the slightest interrupted by a border wall.

Not to mention all the land vehicles that must have come through the ports of entry where there won’t be any walls pic.twitter.com/NBcH5pMJKQ

If anything, this money should be spent helping Americans beat drug addiction or helping the Justice Department get drugs off the street.

Instead, the bill would deprive the Justice Department of money prosecutors worked hard to secure to pay for years of an investigation that brought El Chapo to justice. And it would waste it to build a wall that would be ineffective to stop drugs. Cruz is clearly so desperate to suck up to Trump that he will do or say anything to please him, even if it makes zero sense.