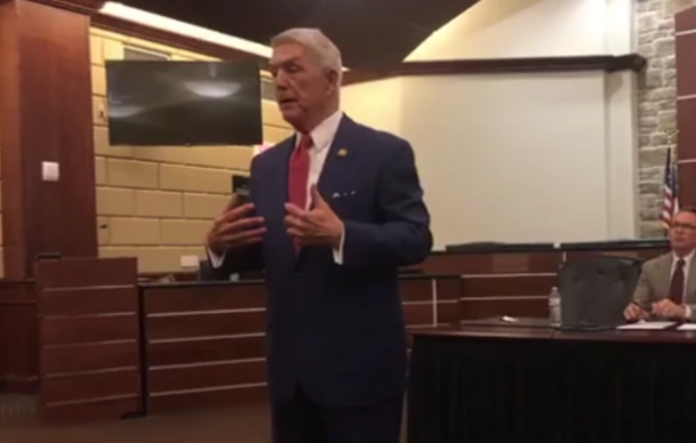 Another Texas Republican has come out in opposition to President Donald Trump’s national emergency declaration, and his constituents applauded him for it, making it pretty clear that Trump will have a hard time getting his wall built on the southern border.

It’s been nearly a week now since Trump announced the declaration before he went to play golf and eat omelets at Mar-a-Lago.

Democrats are poised to introduce a resolution in opposition and 16 states led by California have filed a lawsuit challenging it in federal court.

Many Republicans have also voiced their opposition, but now another GOP congressman from Texas has voice his own.

On Tuesday, Rep. Roger Williams (R-Texas.) took a question from a constituent at a town hall event in Bee Cave.

“Do you support President Trump’s declaration of a border emergency?” he asked.

“No,” Williams answered as the room began applauding him.

Williams explained that he thinks there are definitely problems to deal with at the border but that declaring an emergency is the wrong way to deal with the issue. He’s especially opposed to the declaration because Trump is considering raiding billions of dollars appropriated by Congress for military construction projects, the loss of which would negatively impact Fort Hood, which in part of Williams’ district.

“The reason that I have not been supportive of the declaration is that Congress has done a really poor job, we … Congress, both sides of the aisle, put the president in this situation, OK, but I don’t support it from a selfish standpoint,” Williams said. “When we start drawing funds out of certain areas, one of which may be MILCON, construction of military bases, and we’ve got a lot of momentum going at Fort Hood right now.”

He went on to point out that much of the funding is meant to construct barracks for troops and their families so they are living in homes that aren’t falling apart.

Williams is not the only Texas Republican to oppose the national emergency. Rep. Will Hurd, whose district includes the most border of any congressman, appeared on “Face The Nation” to criticize it.

“I don’t think we needed a national emergency declaration,” Hurd said. “That is not a tool that the president needs in order to solve this problem.”

On “The View,” Hurd observed that about a thousand ranchers are upset about the declaration because they oppose the government taking their land from them through eminent domain.

“They’re going to sue because, in the great state of Texas, we care about a little thing called ‘private property rights,'” Hurd said.

It looks like Trump is another step closer to having an open GOP revolt on his hands.