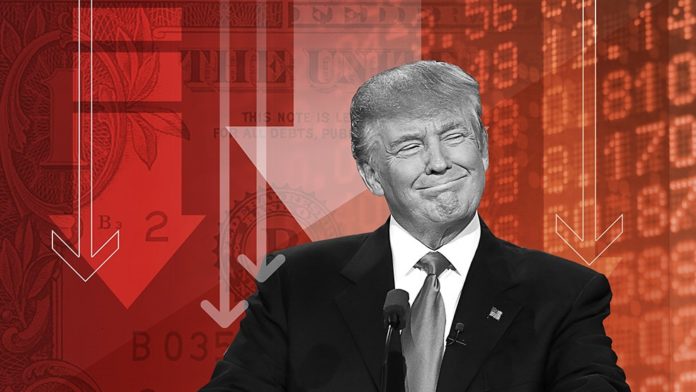 On the surface, 2019 does not look like it’s going to be a good year for President Donald Trump. Just consider what he’s facing in the months ahead:

But while all of those issues present a legitimate existential threat to Trump, the economic mess he’s created may well wind up being what leads to his downfall.

The Dow Jones Industrial Average fell 5.6 percent in 2018 while the S&P 500 finished down 6.2 percent for the year. Even tech stocks on the NASDAQ plunged 3.9 percent. The last time we saw stock losses of his magnitude was right before the 2008 financial meltdown.

Also, the massive tax cut rammed through the GOP-controlled Congress and gleefully signed by Trump in 2017 appears to have overheated the overall American economic engine, causing inflation across all sectors of the business world. To fight against rampant inflation, the Federal Reserve has been forced to raise interest rates, which is always a bad sign.

And let’s not forget Trump’s foolhardy trade war, which is costing American farmers and businesses billions of dollars annually and is one of the main reasons GM recently announced it would be forced to shutter 5 plants and lay off as many as 6,700 salaried and hourly employees.

“We know the economy is likely to slow because you have the waning effects of tax cuts, you have the impact of higher rates already, and you have trade friction.”

All this winds up creating a noxious cocktail of financial news that doesn’t bode well for consumers, business, or the current resident of the White House. It could well make it easier for Congressional Republicans to abandon Trump and support his impeachment if the revelations from Mueller turn out to be especially damaging.

Donald Trump ran for office by saying only he could fix what was wrong with the American economy. But as his multiple business failures have already proven, he’s in way over his head and may have already sown the seeds of his own destruction.