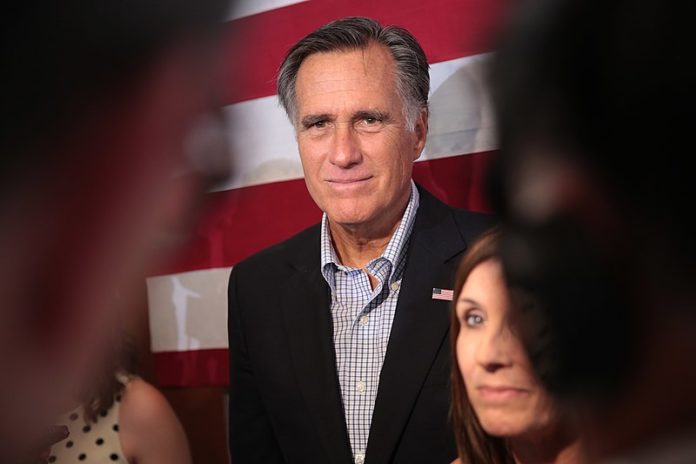 Romney has had a complicated and often flip-floppy relationship with Trump over the years, going from seeking his endorsement in 2012 to opposing his campaign in 2016, only to kiss Trump’s ass during a humiliating dinner.

Trump even endorsed Romney for Senate, but he may be regretting that decision now after the former Massachusetts governor wrote an op-ed for the Washington Post calling him out for being a poor and divisive leader.

“On balance, his conduct over the past two years, particularly his actions this month, is evidence that the president has not risen to the mantle of the office,” Romney wrote, referencing Trump’s government shutdown and his decision to surrender in Syria rather than leave after ISIS is defeated.

Furthermore, Trump’s various attacks on Twitter of the his political opponents, free press and sacred institutions such as the FBI and Justice Department and the rule of law itself have overwhelmed an American people struggling to keep hope alive that our country will survive the petulant child at the helm.

“To a great degree, a presidency shapes the public character of the nation,” Romney continued.

A president should unite us and inspire us to follow “our better angels.” A president should demonstrate the essential qualities of honesty and integrity, and elevate the national discourse with comity and mutual respect. As a nation, we have been blessed with presidents who have called on the greatness of the American spirit. With the nation so divided, resentful and angry, presidential leadership in qualities of character is indispensable. And it is in this province where the incumbent’s shortfall has been most glaring.

But Trump’s behavior and actions have also caused significant damage to our alliances and our standing on the international stage. Trump has been starting trade wars with our allies and attacking NATO while ceding ground to authoritarian leaders in Russia, China, Saudi Arabia and now Turkey. Trump has forsaken the United Nations and has put democracy around the globe in danger.

“The world is also watching,” Romney said. “America has long been looked to for leadership. Our economic and military strength was part of that, of course, but our enduring commitment to principled conduct in foreign relations, and to the rights of all people to freedom and equal justice, was even more esteemed. Trump’s words and actions have caused dismay around the world.”

Romney concluded by calling upon Americans to reject Trump’s politics of fear and hate while promising to do so himself.

But the question is whether Romney really means what he wrote. The fact is that he has repeatedly flip-flopped when it comes to Trump and it would be easy for him to do so again. Romney made it clear within his op-ed that he agrees with much of Trump’s legislative agenda, which means Romney will likely be all talk and no walk when it comes to challenging Trump. Sure, he’ll give Trump a mighty good scolding on Twitter or in op-eds, but he won’t take real action to do something to stop him if it means giving up items on the Republican wish list.

In that vein, Romney would be just another Jeff Flake. His words are wonderful to hear but his actions will speak a lot louder.

There’s no doubt that Romney would be a preferable leader to Trump, but if this is just an act to appear to look like a strong and stable leader before he flip-flops again to do Trump’s bidding, Romney is just setting himself up for yet more political humiliation. His flip-flops did not work in 2012, and they won’t work now. What Americans want and need is a Republican who will stand up to Trump even if it means voting against his legislative agenda and political nominees to send a message that his vile behavior won’t be tolerated. Anything short of that just means we have another spineless Republican in the Senate.