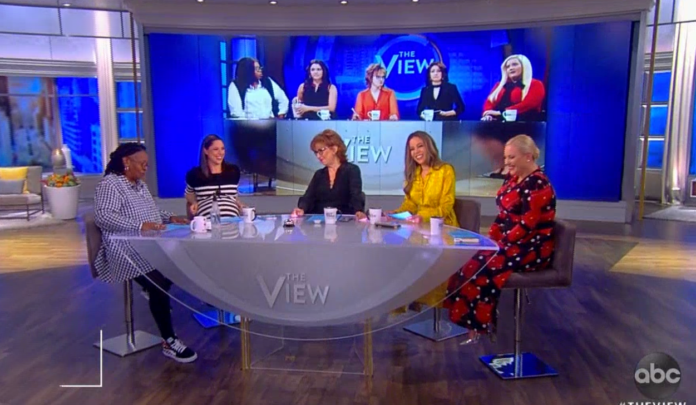 The ladies of “The View” found themselves getting parodied by Saturday Night Live this past weekend and they enjoyed every second of it.

Trump threatened to dump detained migrants into sanctuary cities in order to punish his political opponents despite his own claims that all of these migrants are murderers, rapists, and terrorists.

Leslie Jones portrayed Goldberg, who brought up the remarks. Then Meghan McCain, as portrayed by Aidy Bryant, called herself the “princess of Arizona” and ranted about how there is a border crisis before going on a bizarre rant about how the state was founded by “sunburnt women, not rando Mexicans.”

Kate McKinnon’s version of Joy Behar, played by a woman for a change, suggested that McCain is demonizing migrants. Both women then had an exchange demanding they each let the other finish as the others ate popcorn and filmed the heated exchange on their cellphones.

Whoopi then broke up the stand-off by spraying everyone with a water bottle.

The real hosts of “The View” then remarked about how much Saturday Night live has changed because all of them used to be portrayed by men at one time or another and that it’s great to see more women on the show. Although Behar did tease Sunny Hostin for not being portrayed in that particular skit.

Meghan McCain chimed in by humbly praising Bryant for nailing her impersonation and said that it doesn’t bother her at all. In fact, she called it “an honor” because she used to intern at Saturday Night Live. in addition to that, Bryant and McCain know each other from their school days and McCain gave Brayat major props for “getting her.”

The ladies then agreed that while they come to the table with differences of opinion, at the end of the day they have jobs to do and no amount of satire or criticism will change the way they do them.

Check out the full parody below: