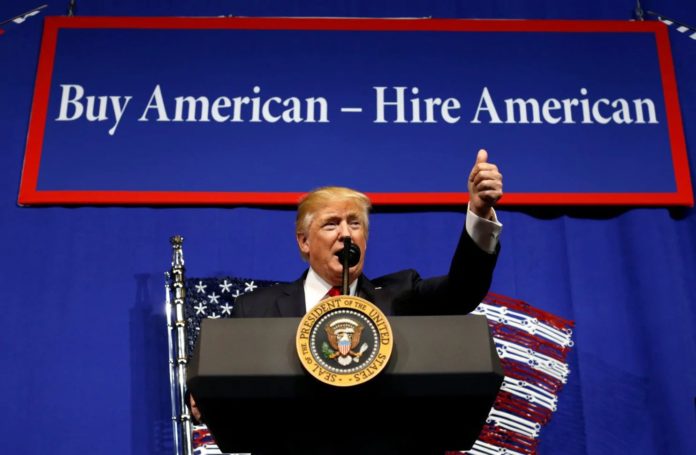 Despite his frequent refrain of how he will “make America great again,” it appears that President Donald Trump’s administration is in directly contradicts his “buy American” policy and is also in violation of federal law.

A new report from the Government Accountability Office (GAO) reveals that the administration has purchased at least $18 million worth of foreign aircraft parts, which directly violates the law.

Connecticut Senator Chris Murphy (D) said it appears several branches of the government not only purchased foreign-made parts, but also reported them as having been made in the U.S.:

“The report found multiple occasions where the U.S. Departments of Defense (DoD), Health and Human Services (HHS), Homeland Security (DHS), and Veterans Affairs (VA), incorrectly recorded or misrepresented information related to the Buy American Act. For example, DHS incorrectly stated that an $18 million contract was spent on aircraft accessories manufactured in the United States, even though the parts were made by a foreign company.”

Murphy added that he’s sick and tired of hearing Trump talk about how he values American workers and businesses and then allows government agencies to skirt the law:

“I am tired of our government sending taxpayer dollars overseas for goods they can buy here at home.

“If President Trump is serious when he says ‘America first’, his administration must get serious about complying with laws that help our manufacturers make products to defend our country.”

Trump, it should be noted, has a history of manufacturing products that carry his imprint in China and Mexico. His daughter, Ivanka, who also serves as a top White House adviser, also has her clothing line produced in overseas sweatshops.

As we’ve discovered since Trump won the election, this president doesn’t think the law applies to him or his family. But with the House now under Democratic control and Special Counsel Robert Mueller moving closer to the Oval Office, Trump may soon find out that he is indeed subject to the very same laws which govern all of us.