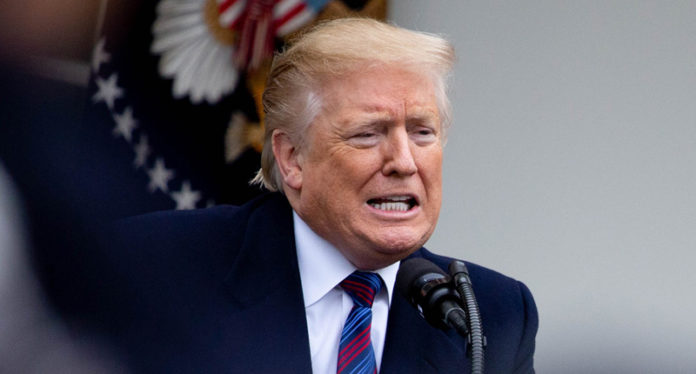 President Donald Trump must be freaking out now that the Southern District of New York has arrested and charged his pal Jeffrey Epstein with child sex trafficking. After all, Trump’s own biographer demonstrated how close the two are with a single quote.

Upon landing at the airport after a trip to Paris, law enforcement took Epstein into custody, thus opening up a new chapter in the Epstein saga.

Epstein had been tried by federal prosecutors in Florida once before for child sexual abuse. Many victims came forward with their allegations against the billionaire but the prosecutor in the case, Alexander Acosta, who now serves as Trump’s Secretary of Labor, struck a deal with Epstein and dropped the charges even though he had an ironclad case against him.

Outrage over the decision has ensued ever since, with Senator Ben Sasse (R-Neb.) calling for the case to be reopened on multiple occasions.

Breaking: Jeffrey Epstein has been arrested for allegedly sex trafficking dozens of minors in New York and Florida between 2002 and 2005, and will appear in court in New York on Monday.

A big score for SDNY. https://t.co/HPyCb9dLj1

2. A former federal prosecutor texts how unusual it was that Epstein was arrested on a Saturday. But noted that the feds like to take advantage of airport departures and arrivals for arrests. Epstein landed in NYC on an international flight today and was taken into custody

3. The same former federal prosecutor made note of this detail in the @thedailybeast scoop: that this case has been overseen by the public corruption unit in the SDNY office. Highly unusual for a sex trafficking case to be handled by PCU. 🤔

4. Also they note that the fact that the indictment won’t be unsealed until Monday is also unusual and COULD indicate that there’s a second defendant in this case.

That must mean this case is far bigger and could ensnare some pretty big fish. And given Epstein’s close relationship with Trump, even he could be under the microscope.

Trump has repeatedly commented on little girls’ looks, even lusting after his own daughter. He has been accused of raping a 13-year-old girl and has on multiple occasions bragged about how he would be dating underage girls who were as young as 10 and 14 at the time he made the comments.

Given that level of creepiness, it’s no wonder Trump caroused with Epstein on a regular basis. Trump even boasted about knowing him and understood that Epstein likes young girls, as his biographer Tim O’Brien revealed by posting the following quote on Twitter.

“I’ve known Jeff for fifteen years. Terrific guy. He’s a lot of fun to be with. It is even said that he likes beautiful women as much as I do, and many of them are on the younger side.” – Donald Trump, 2002 https://t.co/3pbKrcFdn6

It’s unlikely that Trump is the potential second defendant, but you can be damn sure that Epstein has dirt on him and others that he could trade in exchange for a deal.