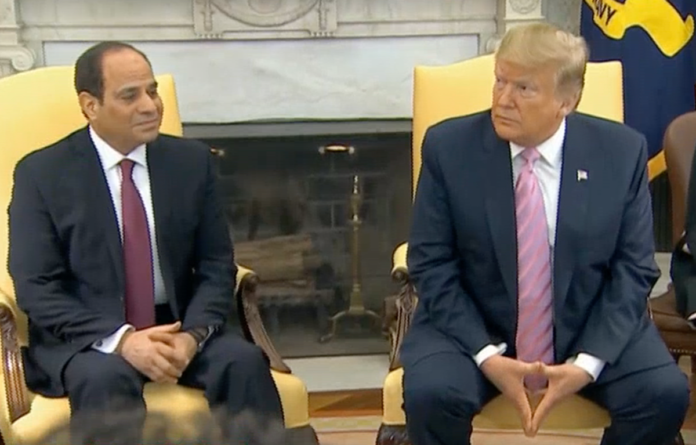 As Attorney General William Barr testified before Congress about the Mueller report, Donald Trump seemed intent to distract, making wildly inaccurate statements about immigration at a press conference. The comments were made during a bilateral meeting with Egypt’s President el-Sisi.

The misleading claims about immigration come as senior advisor Stephen Miller leads a purge of the Department of Homeland Security, in an apparent attempt to reinstate cruel family separations at the southern border.

Trump doubled down on claims that “Democrats want open borders,” which is patently false.

Trump claimed that Democrats in Congress are obstructing his efforts to secure the southern border, even as he and Stephen Miller have been reportedly trying to get the DHS to break the law and reinstate family separation.

“They want open borders. They want to have millions of people pouring into our country. They don’t even want to know who they are.”

The President also shrugged off the family separation policy his administration has enforced, blaming the idea on Obama.

“Just understand, President Obama, separated the children. Those cages – I think they were very inappropriate. They were built by President Obama’s administration, not by Trump.”

“Take a look. The press knows it. You know it. We all know it,” Trump claimed. “I’m the one that stopped it,” he continued.

“President Obama had child separation. I was the one who changed it,” he doubled down.

Trump then claimed he was not looking to reinstate family separation, though reports have claimed the opposite. In fact, reports suggest Trump told his aides he wanted to bring back family separation months ago, even though he was pressured to stop the policy by executive order after an enormous public backlash in June of last year.

When asked if Obama had created cages for children and family separation, Williams replied:

“The idea that this was some Obama-era thing is just a lie,” he said.

Other sources have fact-checked Trump’s claims about Obama, ad they all say pretty much the same thing — he’s lying.