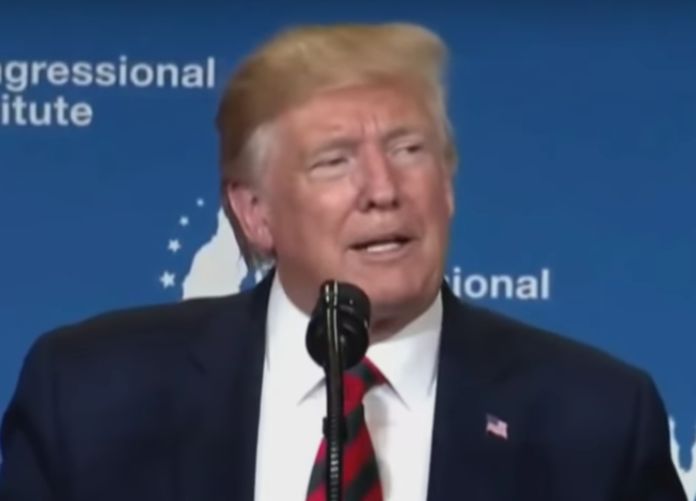 President Donald Trump absolutely embarrassed himself while bragging about gutting clean water rules on Thursday night, even bizarrely claiming that nobody lived in the United States in 1994.

Trump delivered remarks in Baltimore opposite the Democratic 2020 presidential debate in a desperate play to distract the major networks, but they didn’t bite.

He had previously insulted Baltimore in a racist attack on Rep. Elijah Cummings (D-Md.) by calling it “rat-infested.”

At the House GOP retreat, Trump eventually got around to talking about Obama-era clean water rules, which strengthened protections from polluters who would poison our waterways for profit.

Only, Trump gutted those rules earlier that very day.

Of course, the rules were not anti-water at all.

Trump then made another false claim.

“We have the cleanest water, the cleanest air that we’ve ever had in the history of our country, right now,” he said.

Trump’s environmental record is shameful, to say the least. His EPA is allowing mining companies to dump waste in waterways and his concessions to the fossil fuel industry is set to pump billions of tons of carbon dioxide into the atmosphere.

Vice-President Mike Pence had repeated the same claim earlier this year, only to be fact-checked by Jake Tapper on CNN.

Trump then claimed that America had cleaner water and air in 1994 because nobody lived here then.

“Let’s say the history of our country over the last 25 years,” he said. “I would say they probably had cleaner water, cleaner air because there was nobody here. So I have to be very accurate.”

Again, he said this about the year 1994. In fact, 263 million people were living in the United States that year, including Trump and his family, making his claim absolutely absurd.

Trump is totally incoherent. He claims the Clean Waters Act “didn’t give you clean water,” but then in the very next breath says “by the way, today, we have the cleanest air, we have the cleanest water that we’ve ever had in the history of our country.” (This is a lie.) pic.twitter.com/wLsuHRyrid

Trump, making no sense at all, claims that 25 years ago “there was nobody here” in America, and therefore air and water was cleaner than it is now. Twenty five years ago was 1994. pic.twitter.com/6PbqATHrqk