The United States Blues
Home News Ivanka Trump tells GOP donors she got her ‘moral compass’ from her... 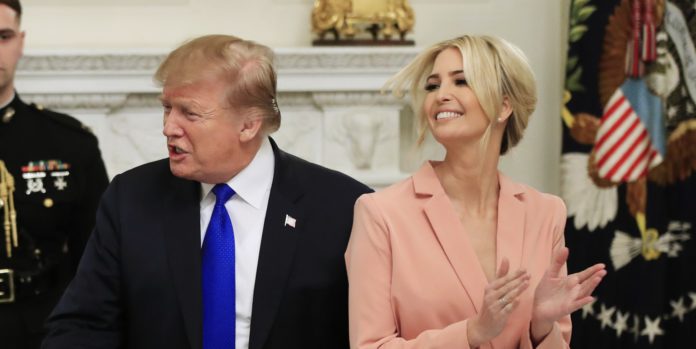 At a recent GOP fundraiser held in Jackson Hole, Wyoming, presidential adviser/First Daughter Ivanka Trump was asked what personality traits she had inherited from her parents.

Ivanka said her mother, Ivana, showed her how to be a powerful successful woman.

What about her father, the president? She replied that he gave her his “moral compass,” according to Politico.

All of was part of an effort to give Republican donors an inside look what Ivanka does at the White House:

The exchange was part of a broader conversation about Ivanka Trump’s life in Washington and the White House during a swanky retreat organized by Republican HouseMinority Leader Kevin McCarthy in the Wyoming mountains. Her appearance signaled an informal effort by the Trump campaign, family and top aides to woo donors this election cycle by sharing intimate, colorful details about this atypical White House.

Dan Eberhart, chief executive officer of Canary LLC, a Colorado-based energy company and Trump supporter, said the retreat had been valuable because it gave him the confidence that President Trump is doing a great job:

“As a Trump donor, it is energizing to hear stories about President Trump being personal and engaged on the issues. The media consistently and conspicuously omits any stories of the president being human or personally engaging, so these firsthand accounts really help paint a fuller picture of what’s happening inside the White House.”

As part of the Jackson Hole event, the president called in to offer his thoughts on what donors were hearing from his daughter:

“His message was simple. The crowd was in good hands with his daughter and son-in-law, Jared Kushner, who spoke the following night. Implicit in his brief remarks was the idea that Kushner and Ivanka Trump speak on his behalf, said two attendees — a status the president does not afford to even his top White House aides.”

Top White House operatives who are also part of the 2020 reelection team say efforts by the president’s children are essential to building a bond between donors and the administration so they’ll continue to contribute:

“You have to have a draw to convince donors to write a $50,000 check to come to a fundraiser. The president and vice president are obviously a draw, and Melania Trump would be amazing, if she would do it. The next best things are the kids. You have to fill the program with surrogates the donors want to see.”

One wonders, however, exactly what “moral compass” Ivanka was referring to considering the many things her father has said and done over the years, including since he took office.