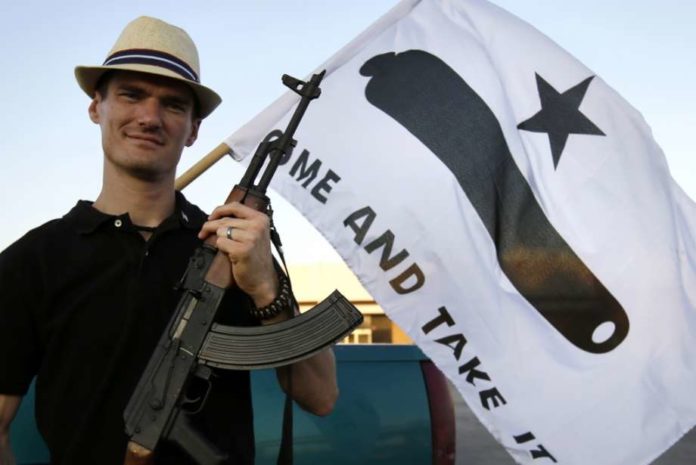 Question: How can you tell President Donald Trump’s allies in right-wing media are worried about what may happen to Republicans in the 2020 election?

Answer: Conservative media is already putting out ominous warnings that if indeed Democrats win the next election, there’s going to be violence.

Writing for DailyKos, Eric Boehlert notes that voices on the right have cranked up the fear factor, and they’re trying to suggest that if Democrats win the White House and retake control of the Senate, their first move will be to outlaw the right to own a gun. And that, they warn, means war:

All of this is part of a larger movement often referred to as Three Percenters, which Media Matters reports has a guiding principle of civil war to get what they want:

“The core philosophy of the Three Percenter movement, whose adherents have engaged in violence, is that citizens would be justified in taking up arms to violently overthrow the government if the government enacted stronger gun regulations.”

Consider the reaction on the right to Beto O’Rourke’s idea of a mandatory buyback program to get rid of assault weapons in the United States. O’Rourke remarked:

“Americans who own AR-15s and AK-47s will have to sell them to the government.”

Keep in mind those weapons were illegal at one time in this country. After passage of the 1994 crime bill during the Clinton administration, assault rifles were banned. Did the republic collapse? It did not.

And yet, that one campaign idea from O’Rourke set off talk of blood running in the streets, Boehlert notes:

Washington Examiner executive editor Seth Mandel defended statements McCain and Carlson made, tweeting that “it’s not justifying or threatening an insurrection to predict” that a mandatory gun buyback program “is likely to go badly.” Townhall’s Kurt Schlichter asked, “How many deaths” is O’Rourke “willing to accept to achieve disarming the citizenry?”

And right-wing radio show host Erick Erickson warned that friends of his who keep AR-15s buried in the ground will likely resort to violence against the government.

Earlier this week, announcements from Walmart, CVS, and Wegmans that those who want to openly carry weapons in their stores are no longer welcome dealt another blow to the fragile psyches of the gun-obsessed and their right-wing enablers.

The problem is that the majority of Americans support sensible gun control. But hardcore Republicans can’t accept that, so they’ve decided to resort to threats. That alone tells you just how afraid they are of what awaits them at the ballot box next year.