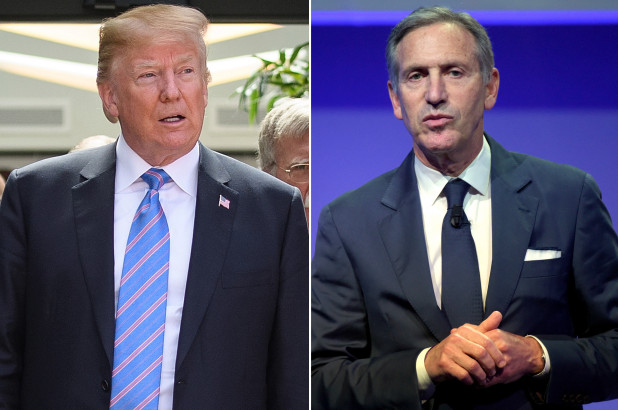 Former Starbucks CEO Howard Schultz said Sunday on “60 Minutes” that he is seriously considering running for president in 2020 as an independent:

“We’re living at a most fragile time. Not only the fact that this President is not qualified to be the president, but the fact that both parties are consistently not doing what’s necessary on behalf of the American people and are engaged every single day in revenge politics.”

Responding to the interview Monday morning, President Donald Trump chided Schultz, saying he didn’t have the guts or brains to win an election:

Howard Schultz doesn’t have the “guts” to run for President! Watched him on @60Minutes last night and I agree with him that he is not the “smartest person.” Besides, America already has that! I only hope that Starbucks is still paying me their rent in Trump Tower!

So Donald Trump is making fun of someone for not being the “smartest person,” but in the next sentence he says America already has a dummy in the Oval Office? How’s that for clueless?

It didn’t take long for Twitter to exact its revenge on the less-than-brilliant Trump:

Has more money than you, self-made,didn’t bankrupt several companies,didn’t ride on the coattails of his father, married to the same person for 30 years. He’s received humanitarian awards for his work with AIDS and veterans.

You are dumb as dog shit.

This is some badly executed reverse psychology. We all know you want him to run because your approval rating is in the toilet and you need him to take a few votes from the Dem nominee.

Chewed socks are smarter than you.

Thing is: Howard Schultz is a billionaire and you aren’t. And he will soon be paying America rent in Trump Tower since that festering dump of treason will be seized by Robert Mueller. You are a Dollar Store Don Corleone wanna be. And demented. Resign.

In which the stupidest man alive calls himself smart, then low key threatens the status of a political rival’s coffee shop inside the real estate holding the stupid one is supposed to have divested from and infrastructure week is off to a roaring start.