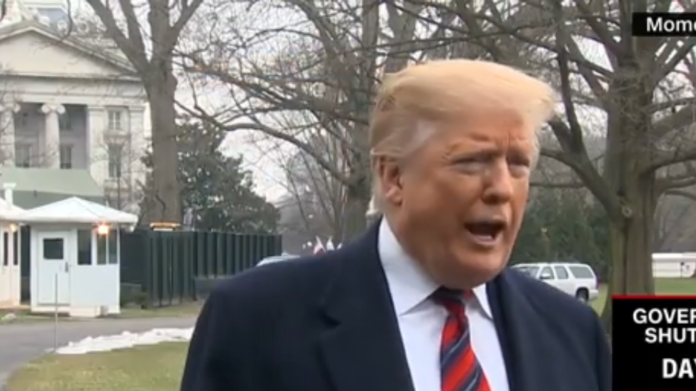 President Donald Trump turned on Fox News Sunday night in a tweet directed at a specific pair of Fox employees who apparently did not cover his wall or the government shutdown the way he wanted.

Trump caved to Democrats on Friday after 35 days of a government shutdown that took a toll on federal workers, the economy and national security, all over a wall that he didn’t get. Instead, Trump agreed to sign the same continuing resolution passed by the Senate in December that he rejected.

Republicans have been desperate to spin Trump’s cave as some sort of example of how benevolent he is and have bent over backwards to blame Democrats for the shutdown even though there is video of Trump directly taking ownership of it.

On Sunday, Fox News White House correspondent John Roberts and Fox panelist Gillian Turner drew Trump’s ire for not spreading his propaganda on the wall and the shutdown:

Never thought I’d say this but I think @johnrobertsFox and @GillianHTurner @FoxNews have even less understanding of the Wall negotiations than the folks at FAKE NEWS CNN & NBC! Look to final results! Don’t know how my poll numbers are so good, especially up 19% with Hispanics?

Fox News has to come to the defense of their employees now. Trump hurling the fake news label at them should be the last straw when it comes to the network’s support of Trump and his behavior. Thus far, Fox News hasn’t commented.

Trump also cited an NPR/Marist poll to brag about having a 50 percent approval among Hispanics, but clearly ignored the fact that his numbers among whites have dropped and his overall approval rating in the poll is 39 percent. It’s much lower in other polls. Furthermore, Hispanics overwhelmingly oppose the wall as do most Americans in general.

It’s clear that Trump is so desperate that he’s even attacking Fox News for criticizing him. At some point, that’s going to backfire on him. Because once he loses Fox News, he’ll have lost his biggest media ally.