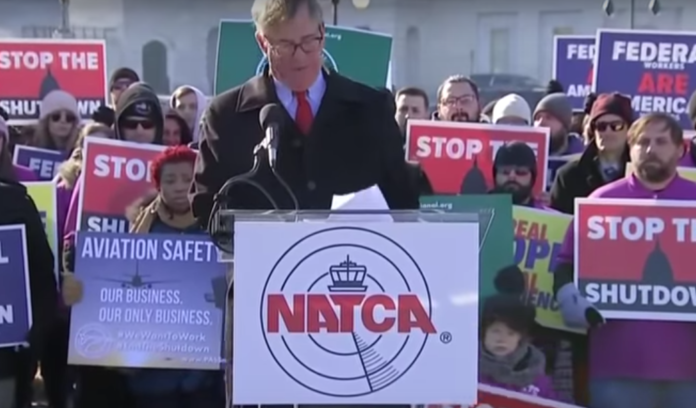 As he rambled on about how Republicans held on to the Senate in November, President Donald Trump had the gall to claim that federal workers don’t care about being paid because they want a wall.

Trump’s government shutdown is now the longest and costliest on record as it enters a fourth week. Thousands of federal workers are not being paid or have been sent home and important government work such as food inspections is not being done. TSA agents are walking off the job, as are border patrol agents and air traffic controllers who are being forced to search for new work to bring in a paycheck to pay the bills.

But during an interview on Fox News with Jeanine Pirro on Saturday night, Trump said that federal workers have told him that they don’t mind not receiving a paycheck because they would rather him get the wall.

“A lot of people that aren’t getting their checks are letting us know, ‘we don’t care. You’ve got to solve the crisis at the border,’” Trump said after spending time rambling on about how it doesn’t matter if Democrats won the House by a landslide because Republicans barely held on to the Senate in November.

Trump has made this claim repeatedly in order to justify continuing the shutdown, but federal workers have already denied it by telling their own shutdown stories on Twitter.

#ShutdownStories It’s not only about paying bills, almost 1 miion employees and along with contractors are having their credit degraded so they will be paying more for everything they purchase for years to come.

Now it’s an emergency to build a useless wall. Instead of declaring an emergency to fund the 800,000 workers who are going without pay which therefore is disabling us from paying our rent/bills/buying groceries.
What a time to be alive..#ShutdownStories

I can’t “get another job” during the shutdown–my agency requires pre-approval to do other work. Trying to stay upbeat and hang on. #ShutdownStories

I want to go back to work. I DON’T WANT A WALL!!! I’m the sole income supporter for my family. Mortgage Co. won’t work with me. May lose my home and the thought of having to stand in line for food is a embarrassing.#shutdownstories @realDonaldTrump

Just got a notice that I am now laid off by my small government contracting company, no back pay.. I create e-learning and apps for diplomats. I loved my job. My diplomat husband is essential with no pay, we have a mortgage and a kid with braces. Please end this. #ShutdownStories

My husband and I just spent all of our savings ($20k) to move across the country so he could keep his federal job. We arrived just in time for him to work for free. #ShutdownStories

Hi Mr. President! Furloughed employee here. Just watched your press conference and contrary to what you may have heard, I think the wall is stupid and would very much like to go back to work. Thanks! @realDonaldTrump #shutdownstories

Putting the boy to bed. He’s out of three medications, his sleep aid, one of his muscle relaxers and his anti rejection medicine. It being the beginning of the year, our deductible restarts. Therefore we are paying full copays on all three. During the shutdown. #shutdownstories pic.twitter.com/PtDhry7oYQ

I don’t normally write my own tweets but retweet others, today I’m panicked. Bills are due. Which do I pay? Meds need to live? Car? Credit card so can buy food, pay elec with CC? Feb mortgage? Need hubbies paycheck! Back to work! #Shutdown #shutdownstories

#ShutdownStories
Can’t get another job, 1 – cause I will not find one here that will pay me the same, 2 – because I need permission from my agency to get a second job and 3- no idea when the government will reopen, it will really look bad if I left the new employer hanging.

Clearly, federal workers do care about not getting paid and they want to go back to work. And they certainly don’t want to lose their livelihoods over a useless wall that experts say will cost too much and will cause devastation to borderlands, and that Republicans who represent border districts oppose.

Evidence that federal workers oppose the shutdown can also be found right outside the White House fence, where many of them have been protesting the shutdown.