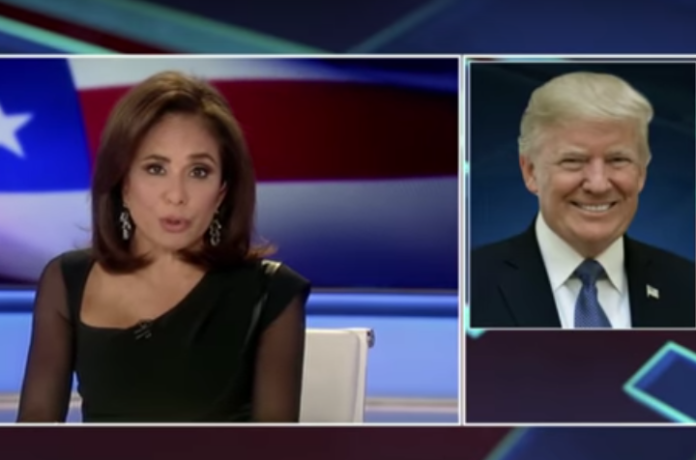 President Donald Trump did very little to dispel accusations that he’s working as a Russian agent on Saturday night during an interview on Fox News with host Jeanine Pirro.

On Friday, a New York Times report revealed that the FBI opened an investigation into Trump out of fear that he is a Russian agent after the firing of former FBI Director James Comey. An investigation of a sitting president would have required seriously good evidence and Justice Department approval, which the FBI apparently had.

On Saturday morning, Trump had a meltdown on Twitter over the report, but he didn’t exactly deny that he is working for Russia. Sure, he whined about the New York Times and the FBI and attacked the Russia investigation, but he ended his tirade by claiming to have “good relations” with Russian dictator Vladimir Putin and argued for closer ties with our longtime adversary. Combine that with the bombshell report that Trump has gone to extraordinary lengths to keep all of his private conversations with Putin secret, and it doesn’t look good.

Trump had a second chance to directly deny that he’s a Russian agent after being directly asked that very question by Pirro. And once again, he raged about the report, but danced around directly denying it.

“I’m going to ask you: Are you now or have you ever worked for Russia, Mr. President?” Pirro asked.

“I think it’s the most insulting thing I’ve ever been asked,” Trump responded. “I think it’s the most insulting article I’ve ever had written! If you read that article you would see they found absolutely nothing,” he said. “But the headline of that article? It’s called the failing New York Times for a reason. They’ve gotten me wrong for three years. They’ve actually gotten me wrong for many years before that. They really are a disaster of a newspaper.”

Trump literally had a prime opportunity to categorically deny being a Russian agent on his favorite propaganda network and he responded by attacking the newspaper instead of answering the question directly.

He’s either inept or he’s definitely hiding something, because one would think the sitting president would want to issue a strong refutation in response to such a question.