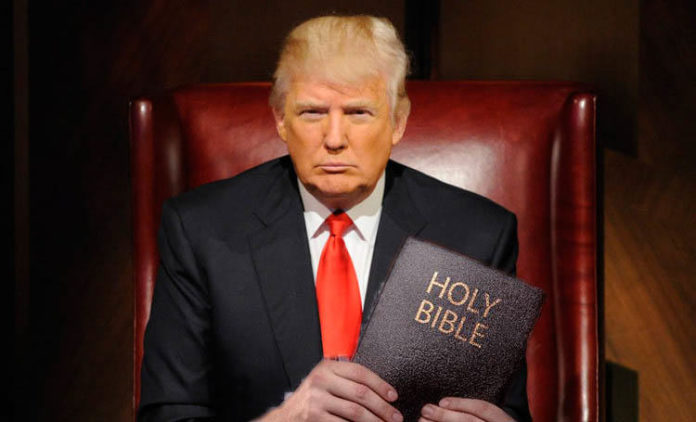 Even though he’s not on the ballot in Tuesday’s all-important midterm election, President Donald Trump is supremely confident that evangelical Christians are going to show up in record numbers to vote for Republicans because he’s done more for religion than any American president in history.

Speaking to reporters from the Christian Broadcasting Network aboard Air Force One this week, Trump proudly declared:

“They’re going to show up for me because nobody’s done more for Christians or evangelicals or, frankly, religion than I have.”

The president then cited specific policies he has implemented since taking office that he believes prove his commitment to religion:

Those two things alone, Trump maintained, are big wins for the evangelical community:

While Trump was only too happy to toot his own horn on the subject of religion, Brian McLaren, a progressive Christian author, said Trump’s claims of being for all Americans is “laughable” at best:

“He is happy to throw LGBTQ people under the bus, women under the bus, Jews and Muslims under the bus, as long as it accrues to his political power and increasing wealth. Even more sadly, conservative Evangelical and Catholic leaders are showing themselves to be becoming more like their leader.

“Recalling the words of Jesus, they gain the president’s special favors and in exchange, sell their souls.”

The irony of so-called “religious” Americans supporting a man as completely immoral, craven, and disgusting as Donald Trump should not be lost on anyone. This is a man who has cheated on all three of his wives, bragged about sexually assaulting women, and is known to have boasted in public about his sexual exploits over the years.

Here’s a line from the Bible that evangelical Christians would be wise to contemplate:

“He replied, ‘Isaiah was right when he prophesied about you hypocrites; as it is written:

“‘These people honor me with their lips,
but their hearts are far from me.'” (Mark 7:6)