The United States Blues
Home News Trump Supporter Says He Is Prepared To Kill His Liberal Sister In... 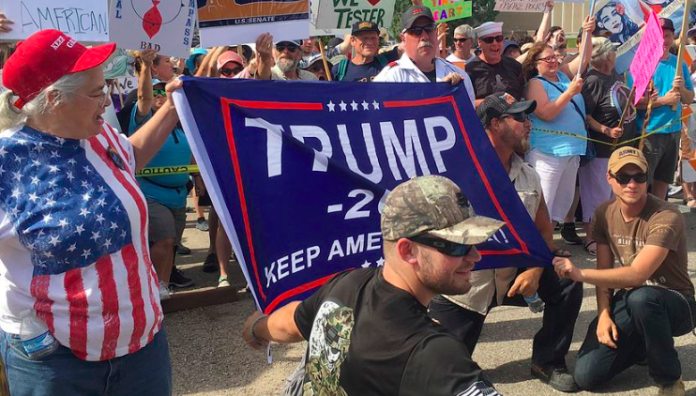 President Donald Trump is literally so poisonous that his supporters foresee civil war breaking out and are prepared to murder liberal family members.

Not since 1860 has America seen tensions so high that civil war could be a possibility. As we all know, the Civil War actually happened in 1861 and 600,000 Americans died in four years of bloody fighting.

That’s the future we face now, but even bloodier.

Trump has already incited his supporters to commit violent acts. The MAGAbomber targeted Trump’s political opponents and critics with explosive devices last week, and an anti-Semitic gunman murdered 11 people at a Pittsburgh synagogue not long after Trump declared himself a “nationalist.”

And now it seems he is pushing his supporters into being even more violent. As in, civil war and murdering liberal family members and friends.

The Guardian writer Ed Pilkington attended several Trump rallies over the last week and was shocked by the response of Trump supporters he talked to, who not only excused Trump’s rhetoric — but labeled Democrats as the enemy. But it was what a Wisconsin Trump supporter told him that is the most concerning.

“Tonight in Wisconsin, the crowd are focused on only one thing – hearing their leader,” Pilkington wrote. “It includes Steve Spaeth, 40, who runs a home exteriors company in West Bend. I ask him who he regards as his political enemies, and whether “hate” is too strong a word.”

Spaeth railed against many of the targets the MAGAbomber attempted to assassinate, used Trump’s racist nickname to attack Senator Elizabeth Warren (D-Mass.), and even said he would kill his own liberal sister to fight for Trump in the event of a civil war.

“Not at all,” he says. “I have a deep and absolute disgust for these human beings.”

He rattles off CNN, Soros, Clinton, Waters, Booker, “Pocahontas” AKA Elizabeth Warren, and others.

Why do you hate them?

“They want to turn America into a socialistic country. It’s disgusting.”

I ask Spaeth how far he is prepared to take his hatred. In reply, he tells a story. The other day he talked to his sister, who is liberal and votes Democratic. He said to her: “If there is a civil war in this country and you were on the wrong side, I would have no problem shooting you in the face.”

You must be joking, I say.

“No I am not. I love my sister, we get on great. But she has to know how passionate I am about our president.”

Yeah, I’m sure she really feels the love now that her own brother just publicly said he would murder her for Trump.

This is a prime example of Trump pushing his supporters to the extreme with his violent and hateful rhetoric. Liberals are now enemies of the state who should be locked up or slaughtered and his supporters are in agreement.

America just got a whole lot more frightening and these are the same people who want unlimited access to firearms. Now we know what they intend to use them for.