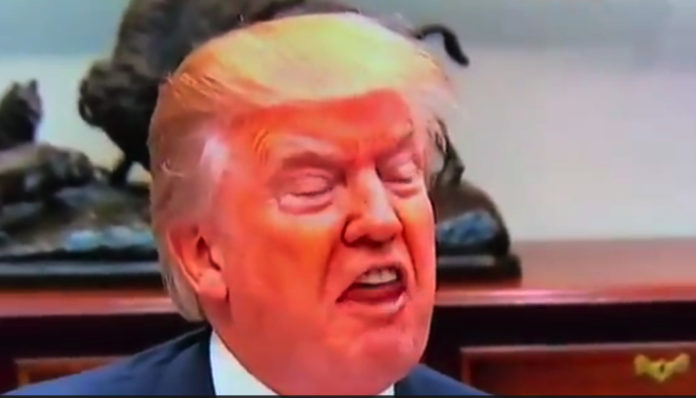 Poor Donald Trump. Thanks to the government shutdown, he’s had to delay his departure for Christmas vacation at Mar-a-Lago, so he decided he’d post some of his bizarre ranting on Twitter, even going to far as to say that the shutdown is fake:

I am in the White House, working hard. News reports concerning the Shutdown and Syria are mostly FAKE. We are negotiating with the Democrats on desperately needed Border Security (Gangs, Drugs, Human Trafficking & more) but it could be a long stay. On Syria, we were originally…

….going to be there for three months, and that was seven years ago – we never left. When I became President, ISIS was going wild. Now ISIS is largely defeated and other local countries, including Turkey, should be able to easily take care of whatever remains. We’re coming home!

Wow! There’s a whole lotta crap to unpack there, but let’s give it a try:

Twitter was not kind to Trump’s claims of how he’s got everything under control:

The only thing that is “fake” is your presidency.

That means you are 3/4 of the way through a bucket of chicken?

Your lies are evident to all. ISIS has not been defeated. Instead, you have caved to Putin. You are a puppet

It was reported this afternoon that Trump held a luncheon at the White House in an attempt to solve the shutdown. Problem is, he only invited Republicans for lunch. How’s that for bipartisanship?