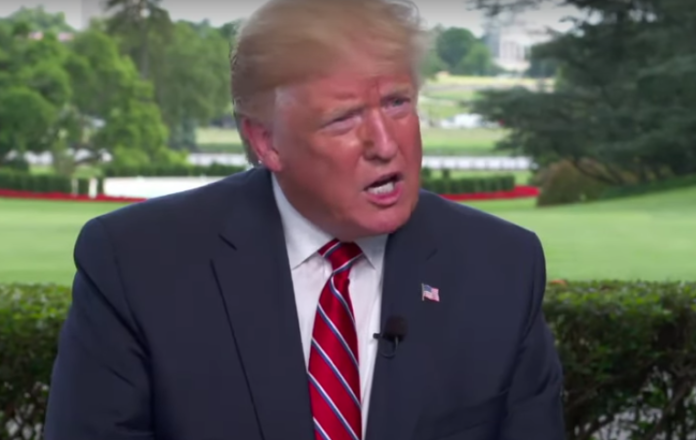 President Donald Trump declared that Article II of the Constitution grants him absolute power to do whatever he wants on Sunday during an interview with ABC host George Stephanopoulos.

Earlier in the week, a snippet of the interview revealed Trump soliciting foreign interference in 2020 for his own benefit.

The rest of the interview, which aired on Sunday, featured Trump insisting that he never tried to fire Special Counsel Robert Mueller even though former White House Counsel Don McGahn testified that Trump ordered him to do just that, an order he refused to obey.

“Number one, I was never going to fire Mueller,” Trump claimed. “I never suggested firing Mueller.”

“That’s not what [Mueller] says,” Stephanopoulos responded, pointing out that the Mueller report details the incident as obstruction of justice.

“I don’t care what he says,” Trump said.

“Why would Don McGahn lie under oath?” the ABC host asked.

“Because he wanted to make himself look like a good person,” Trump replied before making a terrifying tyrannical declaration. “Number one, I didn’t. He wasn’t fired. But more importantly, Article II allows me to do whatever I want. Article II would have allowed me to fire him.”

EXCLUSIVE: President Trump tells @GStephanopoulos that he “wasn’t gonna fire” special counsel Robert Mueller because “I watched Richard Nixon go around firing everybody, and that didn’t work out too well.” https://t.co/J72Biz1YSs pic.twitter.com/glA1e6L57y

Article II does not give the president the power to do whatever he wants. Trump is literally arguing that the Constitution makes him a dictator and that’s just not how it works. His declaration also serves to give him an excuse to seek foreign help in the 2020 Election. And if his latest Twitter tantrum is any indication, Trump could use this same declaration to stay in power as long as he wants.

…..news is that at the end of 6 years, after America has been made GREAT again and I leave the beautiful White House (do you think the people would demand that I stay longer? KEEP AMERICA GREAT), both of these horrible papers will quickly go out of business & be forever gone!

This is why the House should start an impeachment inquiry against Trump. He is too dangerous to be in the office and the American people need his crimes to be laid out in a series of nationally televised hearings. This is a national emergency and democracy and the Constitution itself are at stake.