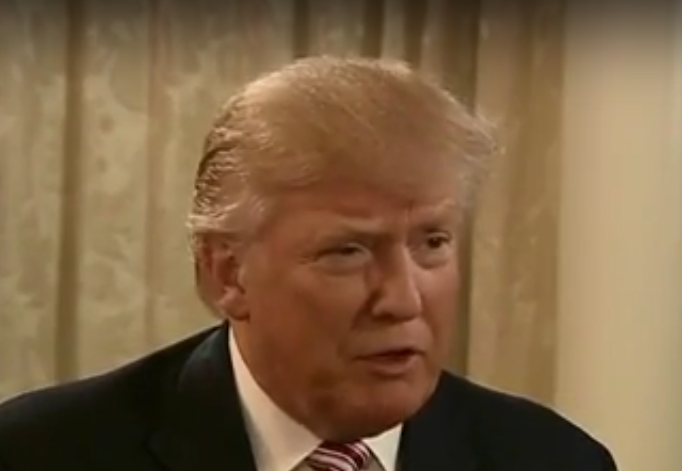 President Donald Trump kept digging himself a deeper hole on Friday morning by admitting that he had dealings with the Russians during the 2016 Election.

On Thursday, a bombshell story made a direct hit on Trump when it was announced that his former longtime lawyer and “fixer” Michael Cohen reached a plea deal with Special Counsel Robert Mueller and admitted in court that he lied to Congress for Trump about a proposed business project between the Trump Organization and the Russians.

It turns out that Trump was working on trying to build a Trump Tower building in Moscow, not through January 2016 as Cohen testified and Trump has claimed, but through June 2016, which just happens to coincide with the Trump campaign’s meeting with Russian agents to get “dirt” on Hillary Clinton and the same month Trump asked Russia to hack the Clinton campaign and the DNC to look for emails.

Buzzfeed even reports that Trump wanted to give Putin a $50 million penthouse in the building. That’s quite a gift for someone Trump supposedly had never met prior to 2016. In fact, Trump has repeatedly claimed that he has had “no dealings” with Russia, like in these two tweets that clearly did not age well.

Russia has never tried to use leverage over me. I HAVE NOTHING TO DO WITH RUSSIA – NO DEALS, NO LOANS, NO NOTHING!

I don’t know Putin, have no deals in Russia, and the haters are going crazy – yet Obama can make a deal with Iran, #1 in terror, no problem!

But Trump is now carefully admitting that he had dealings with the Russian in 2016.

Prior to boarding Marine One on his way to Argentina for the G-20, Trump claimed that even if he did have dealings with Russia he was allowed to do it.

And on Friday morning, Trump went just a little further.

Oh, I get it! I am a very good developer, happily living my life, when I see our Country going in the wrong direction (to put it mildly). Against all odds, I decide to run for President & continue to run my business-very legal & very cool, talked about it on the campaign trail…

….Lightly looked at doing a building somewhere in Russia. Put up zero money, zero guarantees and didn’t do the project. Witch Hunt!

In short, Trump lied to the American people and he lied to his supporters over and over again about his dealings with Russia.

Here’s a video featuring the many times Trump lied about his dealings with Russia via YouTube.