The United States Blues
Home News Trump has a meltdown after Spike Lee delivers call to action in... 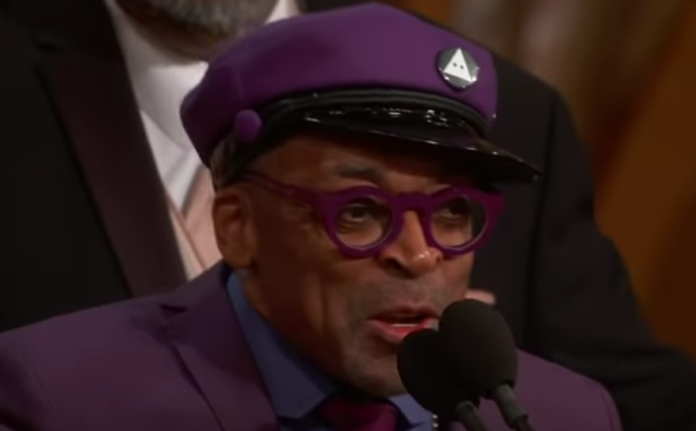 President Donald Trump targeted filmmaker and director Spike Lee on Monday morning in response to an Oscars speech in which Lee never even said Trump’s name.

Sunday night marked the first time in his career that Lee has won an Oscar, this time in the screenwriting category for his recent film “BlacKkKlansman.”

During his remarkable speech, Lee paid tribute to his ancestors, who were slaves.

“For 400 years, our ancestors were stolen from Africa and brought to Virginia and enslaved,” Lee said. “They worked the land from ‘can’t see’ in the morning to ‘can’t see’ at night. My grandmothers — who lived 100 years young, a college graduate even though her mother was a slave — my grandmother, who saved 50 years of Social Security checks to put me through college.”

He concluded the speech by calling on Americans to reject hate in 2020. He did not mention Trump’s name but it’s clear that Trump is the hate in the White House that needs to be ousted.

“Before the world tonight, I give praise to my ancestors who built our country, along with the genocide of our native people,” Lee said. “We all connect with ancestors, to regain our humanity. It will be a powerful moment. The 2020 presidential election is around the corner. Let’s all mobilize, let’s all be on the right side of history. Make the moral choice between love versus hate. Let’s do the right thing.”

When Trump heard about the speech during his “executive time” the next morning, he threw a temper tantrum and accused Lee of doing a “racist hit” against him and claimed to have done more for black people than any other president.

Be nice if Spike Lee could read his notes, or better yet not have to use notes at all, when doing his racist hit on your President, who has done more for African Americans (Criminal Justice Reform, Lowest Unemployment numbers in History, Tax Cuts,etc.) than almost any other Pres!

Of course, Trump’s tax cuts only helped the wealthy as his own supporters are finding out this tax season. Those low unemployment numbers are just a continuation of former President Obama’s policies, as the black unemployment rate dropped significantly under his watch before he left office from nearly 17 percent to 7.8 percent, just one percent higher than it is now. In short, Trump gets no credit for the low unemployment rate and should not be claiming credit.

Also, criminal justice reform is a bipartisan effort. The only reason Obama didn’t achieve it is that Republicans constantly obstructed him.

Trump can’t claim he’s not a racist and then accuse one of the most celebrated black directors in our nation of being a racist. Lee’s speech had nothing to do with Trump being white, and everything to do with Trump being a hateful bigot who divides the nation every chance he gets whether it’s by calling neo-Nazis “fine people” or calling African nations “sh*thole countries.” Trump is not a friend to the black community. In fact, he’s not even a friend to the American community. And that’s precisely why Lee called on Americans to unite against hate in 2020. It’s time to get the hate out of the White House.