The United States Blues
Home National News Trump instructs aides to break the law if necessary to get border... 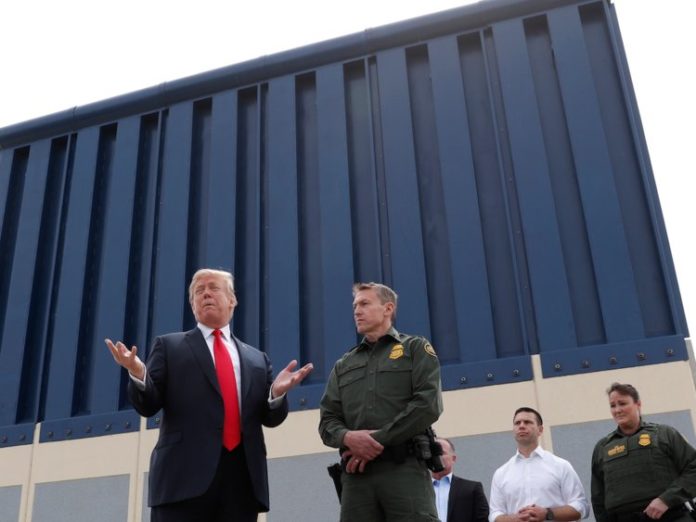 President Donald Trump has told aides that he wants his long-promised wall on the U.S.-Mexico border built before the 2020 election, and is even urging them to break the law if necessary in order to make sure the structure is completed ASAP, according to the Washington Post:

President Trump is so eager to complete hundreds of miles of border fence ahead of the 2020 presidential election that he has directed aides to fast-track billions of dollars’ worth of construction contracts, aggressively seize private land and disregard environmental rules, according to current and former officials involved with the project.

He also has told worried subordinates that he will pardon them of any potential wrongdoing should they have to break laws to get the barriers built quickly, those officials said.

Trump has promised to have at least 500 miles of border fencing completed by the time ballots are cast on Election Day 2020, and often leads crowds at his rallies in chants of “Finish the wall!” So far, however, only 60 miles of replacement barrier has been constructed since Trump took office.

Perhaps sensing that he cannot possibly win reelection if a signature promise of his 2016 campaign isn’t fulfilled, Trump has reportedly held regular top-level meetings with aides for updates on the project:

When aides have suggested that some orders are illegal or unworkable, Trump has suggested he would pardon the officials if they would just go ahead, aides said. He has waved off worries about contracting procedures and the use of eminent domain, saying “take the land,” according to officials who attended the meetings.

Deputy White House Press Secretary Hogan Gidley suggested that the president is keeping his promises regarding the wall, despite the lack of tangible evidence:

“President Trump is fighting aggressively for the American people where other leaders in the past have rolled over, sold out, and done absolutely nothing.”

If landowners refuse to sell their property, the Post notes, it will be seized:

“There is no more constitutionally permissible public purpose for eminent domain than national defense,” said a current administration official who was not authorized to speak on the record about the contracting process.

“Our intention is to negotiate with every property owner, and every property owner will receive fair market value for the land,” the official said. “But the land that is needed is not replaceable land. This is not like building a hospital or even a school. There is no alternative land to the border.”

But is any of this legal?

Robert Maguire, research director for the watchdog group Citizens for Ethics, says Trump’s promise to pardon anyone who breaks the law in order to get the wall built is an impeachable offense:

I would just like to casually remind folks that the Founders explicitly discussed the possibility that a president might someday misuse the pardon power.

Their explicit remedy for such a transgression was impeachment. https://t.co/65tUTp3MVy

James Madison: “If the President be connected, in any suspicious manner, with any Person, and there be grounds to believe he will shelter him, the House of Representatives can impeach him” pic.twitter.com/1nBm6hSugU

Before another foot of wall is constructed, we can expect plenty of court fights and calls for impeachment if Trump refuses to obey court orders.