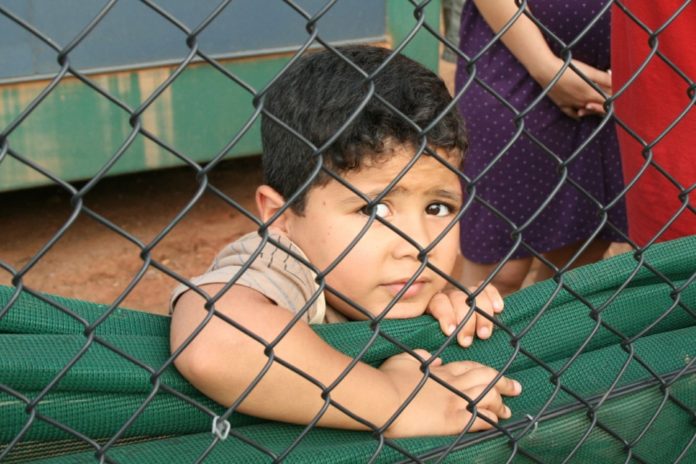 As if the Trump administration’s family separation policy isn’t already inhumane enough, the White House now has plans to jail immigrant children on a toxic waste site in Texas.

According to Shareblue Media, environmental organization Earthjustice has just released a report showing that the administration plans to detain at least 7,500 unaccompanied minors at Goodfellow Air Force Base:

“The area planned for the proposed detention center ‘is contaminated with lead, arsenic, benzene, PFAS, and other chemicals associated with increased risk of cancer and neurodevelopmental damage,’ Earthjustice wrote. Additional chemicals at the site emit vapors which can cause ‘nausea, headaches, and damage to the nervous system, kidneys, and liver.'”

Rep. Judy Chu (D-CA), head of the Congressional Asian and Pacific America Caucus, said the new detention facility and the administration’s continued jailing of minors is beyond cruel:

“From loopholes that allow them to hire staff without even a background check to this new proposal to build a camp on a toxic dump, the entire approach of this administration towards immigrant children has been characterized by cruelty.”

But Congress is fighting back against how Trump is treating immigrant children. Chu and Senator Jeff Merkley (D-OR) have introduced legislation that aims, according to Chu, “to end the detention of immigrant children and stop dangerous facilities from existing at all.”

The bill they’ve introduced is known as the Shut Down Child Prison Camps Act, has one goal: To shut down each and every unregulated child prison camp in the United States.

In a statement she issued on the day the legislation was announced, Chu noted that she had visited a camp in Tornillo and been absolutely horrified by what she saw there:

“I will never forget the lines of children being forced by guards to march in a single-file line just to go to the bathroom because they were not allowed to go anywhere on their own.”

“Our taxpayer dollars are being used to traumatize children by keeping them in child prison camps instead of in homes and communities. This is evil.”

Jailing babies is immoral and should be illegal. And the very idea that this administration plans to house even more children at a toxic waste site is, as Senator Merkley noted, just plain evil.