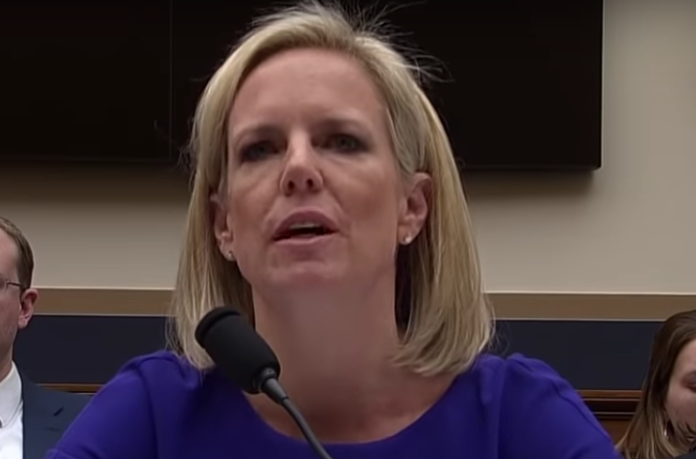 Department of Homeland Security Secretary Kirstjen Nielsen could be the subject of an FBI investigation after Senator Jeff Merkley (D-Ore.) officially made a criminal referral accusing her of lying to Congress.

During a House Judiciary Committee hearing last month, Nielsen openly declared that there is no policy of separating children from their parents at the border.

“I’m not a liar, we’ve never had a policy for family separation,” she said.

The problem is that Trump’s own DOJ announced the “zero-tolerance” policy in April 2018, and there is no law on the books requiring the separation of families that have been a key part of Trump’s border policy.

According to NBC News, “at least 2,600 children were separated from their parents under the Trump administration’s “zero tolerance” policy at the border.”

In short, Nielsen lied to Congress.

And Merkley wants the FBI to investigate, which is why he announced that he sent a letter to the FBI on Thursday to make the request.

I’m formally requesting that the @FBI investigate whether @SecNielsen committed perjury during her testimony under oath before @HouseJudiciary. The memo I released yesterday flat-out contradicts her statement that there was no child separation policy. https://t.co/Bj6FDsACv6 pic.twitter.com/KJBxp5A06O

“Compelling new evidence has emerged revealing that high-level Department of Homeland Security officials were secretly and actively developing a new policy and legal framework for separating families as far back as December 2017,” the letter states. “This policy, called ‘Separate Family Units,’ was specifically designed to gain media attention and generate a ‘substantial deterrent effect.’ Despite this fact, while testifying under oath before the House Committee on the Judiciary, Secretary Nielsen stated unequivocally ‘I’m not a liar, we’ve never had a policy for family separation.’”

“In light of these conflicting facts, the FBI should immediately investigate whether Secretary Nielsen’s statements violate 18 U.S. Code § 1621, 18 U.S.C § 1001, or any other relevant federal statutes that prohibit perjury and false statements to Congress,” he concluded.

Nielsen has been under fire for months because of the horrifying policy, which places children in cages in what amount to internment camps. Two child migrants have also died in Border Patrol custody. She is complicit in these crimes against humanity and she’s lucky she’s only being investigated for lying to Congress.

This is a policy that never should have been allowed to happen. Instead of standing up to Trump, Nielsen enabled him and has been acting as a loyal toady ever since, falsely insisting that hordes of terrorists are rushing the border when the fact is that most of the people crossing the border are families seeking asylum from the chaos and killing in their homelands. They are not criminals, but Trump and Nielsen sure do enjoy treating them like it.

Now that Democrats are in charge of the House, it’s her turn.