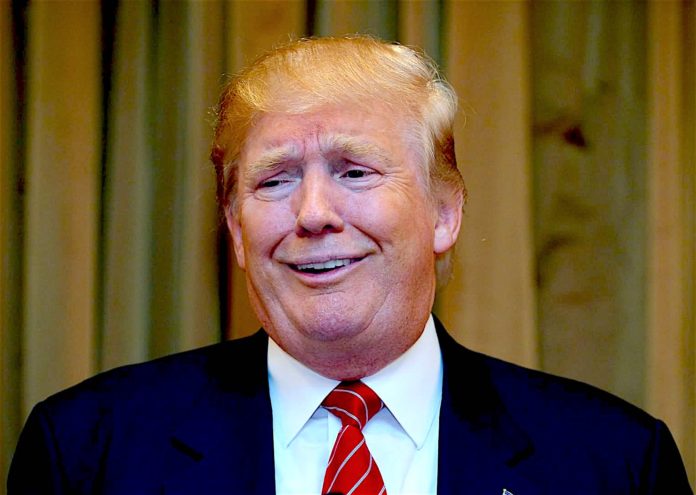 President Donald Trump took to Twitter Sunday morning pretending to honor veterans on Veteran’s Day the day after he refused to attend a ceremony to honor Americans killed during the First World War because he was afraid of a little rain.

Trump caused much outrage over his decision to cancel his appearance at the Aine-Marne American Cemetery and Memorial at Belleau Wood in France on Saturday, including condemnation from the grandson of Winston Churchill.

Our soldiers risked their lives and thousands died fighting in bad weather on hellish battlefields far from home, yet Trump could even be bothered to stand in some rain for a short time.

On Sunday, he had the gall to pretend that all is forgiven in a tweet marking Veteran’s Day.

On this Veterans Day — the 100th Anniversary of the end of WWI, we honor the brave HEROES who fought for America in the Great War, and every Veteran who has worn the uniform and kept our Nation Safe, Strong and FREE! https://t.co/zBvvYRR7XE pic.twitter.com/YO06ztfvNm

Twitter users were not buying it. After all, if Trump really cared about Americans who perished during World War I, he would have attended the ceremony at the cemetery where they are buried instead of sitting inside his hotel so his hair wouldn’t get wet.

You could not be bothered because of rain?

You’re so vain, you think a picture of you hugging a Veteran makes what you did yesterday forgivable, it doesn’t and to Congress who enable this person we call president, shame on all of you.

You couldn’t sacrifice time to go to the cemetery yesterday.
You showed up late to dinner,embarrassing USA on the world stage.
You didn’t walk with all other world leaders;
you and Putin “coincidentally”showed up late.

Today is about heroes.
Clearly not you in any way.

You failed to honor Veterans when you:
* Insulted POWs
* Denigrated Gold Star Families
* Dodged Vietnam for “bone spurs”
* Continue to refuse to visit our troops in Afghanistan
* Deployed them to the border over the upcoming holidays for a false emergency #UnfitToBePresident

A real President @BarackObama in the rain, honoring our troops. pic.twitter.com/g2QE3QWEXE

As we sit here in the rain, thinking how uncomfortable we must be these minutes as our suits get wet, and our hair gets wet…it’s all the more fitting that we remember on that day in Dieppe the rain wasn’t rain it was bulletspic.twitter.com/UwNDpKH9KI

From a 5X Draft Dodger. No one named Trump has ever served their country and none ever will. A long family tradition of cowardice. The only rifles ever fired by a Trump have been at defenseless animals. Admired only by those who think “talking” tough equals courage. #VeteransDay

Nope, YOU didn’t honor them at all. YOU stayed behind as more than 50 REAL leaders walked in the rain to the Arc de Triomphe to mark the 100th anniversary of the end of World War I. What other “leader” is missing? Putin. Why is it ALWAYS you & Putin? We’ll know soon. #MuellerTime pic.twitter.com/lYRevJim0t

“…we honor the brave HEROES…”

Trump demonstrated that he really does not care about our veterans. He had a chance to do so on Saturday and he blew it. Actions speak louder than mere tweets, and Trump failed miserably. And he owes veterans a public apology.