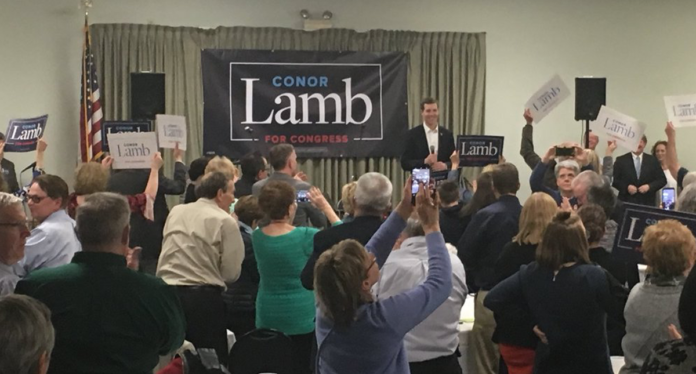 The 18th congressional district in Pennsylvania has become a major political battleground this month. A special election will take place on March 13, and the Democratic candidate, Conor Lamb, is just 3 points away from taking the lead in recent polls. His opponent, Rick Saccone, had billed himself as “Trump before Trump was Trump,” but voters in the working-class district quite probably will find that a turn-off, boosting the odds of flipping the district blue.

Ms. Stroud, the wife of a laid-off steelworker, said:

“I think Saccone would be one of Trump’s henchmen, and I don’t trust him.”

Locals cite Trump’s ongoing chaos, his failure to deliver on promises to help average Americans, his petty Twitter posts, and his inability to lead Congress as some of the reasons they are turned off to Trump.

Judy Dulaney, a 65-year-old retired employee from the state Department of Welfare, said:

“I did not like either Clinton or Trump, but I figured the lesser of two evils was Trump. Now I’m second-guessing myself. Because he’s nuts.”

The 18th District represents suburbs south and east of Pittsburgh to the border of West Virginia. This “coal country” district is unique in that it once voted Democrat reliably, but shifted Republican as the Democratic party shifted further left, even though Democrats actually outnumber Republicans by 70,000 people.

Many of the locals are gun-owning seniors that don’t neatly fit into a political typology. They are looking for a social moderate who can deliver on promises to help working-class citizens.

The majority in the 18th District voted for Democrat Walter Mondale in 1984 but supported Mitt Romney, John McCain, and Trump in the presidential election. Trump won the district by 20 percentage points, but since then, his performance in the role of President hasn’t lived up to expectations.

According to a Monmouth University poll, Saccone holds the slim edge of 49 percent to Lamb’s 46 percent. The poll noted that “a partisan gap in enthusiasm around President Donald Trump has helped Democrat Conor Lamb stay within striking distance.”

Conor Lamb, 33, a former Marine and federal prosecutor seems to fit the exact mold for what the locals are looking for: A candidate leaning moderate on social issues who is looking out for the economic interests of the common people instead of millionaires. He comes from a family of notable former politicians, including his grandfather, a former Democratic majority leader in the Pennsylvania Senate.

He’s pro-gun, a stance that aligns with many gun owners in the district. In fact, after the school shooting in Florida, he made a statement at a campaign event that he believes strengthening background-check laws are the answer, not changing gun laws.

As Republicans have begun to panic about losing the race, they sent out Vice President Pence to campaign for Saccone in February. National Republican groups invested $10 million into the race, outspending Democrats 10 to one.

They paid for attack ads against Lamb, accusing him of being a puppet for the Democrat House minority leader, Nancy Pelosi. But Lamb clearly isn’t aligned with Pelosi – he released his own TV spot in direct response, explaining why the Republican lied.

“My opponent wants you to believe the biggest issue in this campaign is Nancy Pelosi. It’s all a big lie,” says Conor Lamb. “I’ve already said on the front page of the newspaper that I don’t support Nancy Pelosi. The real issues are the ones that affect your lives.”

See the ad below:

Although Republicans are outspending him, Lamb has also seen a surge in grassroots fundraising, raising $3.2 million in the first seven weeks of 2018. Even so, the Democratic Congressional Campaign Committee has only moderately invested in the race, believing the race will be tough to win.

“I think people underestimate that this is a tough district,” said DCCC spokeswoman Meredith Kelly.

Former Vice President Biden will campaign for him on Tuesday, but Lamb has not sought the national spotlight. Instead, he focused his efforts locally, talking one-on-one to his potential constituents.

“We are going to win this thing on March 13th.” #PA18 pic.twitter.com/FzoWt4yOuu

Now the election is just days away, and the outcome, even if Lamb narrowly loses, will be an indicator of what’s to come in the November mid-terms. By November, a newly created district map drawn by the Pennsylvania Supreme Court to address Republican gerrymandering will more fairly represent the voters in the area and place his hometown, Mt. Lebanon in the 17th District.

“An upset victory by Mr. Lamb, or even a narrow loss, would send shock waves ahead of the midterm elections in the fall, when Democrats will try to retake control of the House of Representatives,” wrote Trip Gabriel for the New York Times.

See more in the video below: