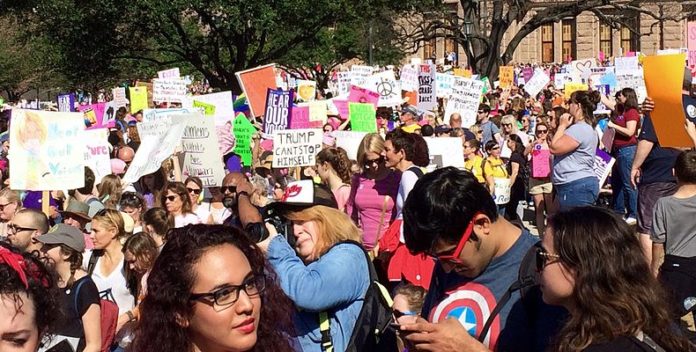 Texas Republicans are bracing themselves for an avalanche of female primary candidates this year as women continue their backlash against President Donald Trump.

In 2013, one of the few women in the Texas state senate, Wendy Davis, stood for an amazing 11 hours to filibuster a GOP anti-abortion bill that threatened women’s health across the state. She succeeded that day, but the bill passed anyway in another special session called just to pass that bill.

Davis’ stand inspired women across the state to protest, and that movement grew when Davis ran for governor against current Texas Governor Greg Abbott.

Three years later, the Electoral College elected Trump, president, and the wave that started in 2013 became a tsunami that is poised to hit the male-dominated Republican Party hard in 2018.

In a few days, Texas will hold a primary election that will be consequential for the state and the nation.

At least 50 female challengers have filed to run in Texas congressional races in the March 6 primary, raising the prospect that Texas — a state with 36 districts but just three women in its House delegation — will finally see its breakthrough moment for women in 2018.

Many of the women running, including those running as Republicans, are doing so out of anger at Republicans like outgoing House Reps. Blak Farenthold (R-Texas) and Joe Barton (R-Texas), both of whom are leaving office after sexual misconduct scandals.

“My daughters need to know that the system works. If you cannot trust someone with your wife or daughter, you can cannot trust them with your money or freedom.”

The shock of Trump’s victory in 2016 also motivated Democratic candidates Veronica Escobar and Mary Jennings Hegar to enter races in their districts.

“‘I wanted to know that I did something.’ Heger said, while Escobar hopes 2018 ‘s the year that stars are aligned for other women.'”

Soon after his inauguration, millions of women in Washington D.C. and around the nation marched in protest. The #MeToo movement has also swept the nation over the last few months, and Republicans haven’t been very receptive to the movement when their own members are accused.

The combination of Trump and Republican refusal to take sexual assault allegations seriously created a powder keg that is set to explode. And Texas, which has the second largest House delegation, will be the first state to feel the impact.

Just this week, Governor Abbott sent an email to donors warning that Democratic early voting numbers are way up from previous years, which has Republicans across the state panicking as the Democratic goal of Texas turning blue for the first time in decades becomes more of a possibility.

More women in elected positions could very well turn the tide of anti-women legislation that Republicans have been pursuing over the last few years.

So, the Republican Party should be terrified, especially since even Republican women are getting fed up.

For too long, women have been ignored by the Republican Party. But if women change the game in Texas, Republicans are going to pay a heavy price for their anti-women agenda. And that will be good news for the country, and bad news for the GOP as the 2018 Election in November gets closer.