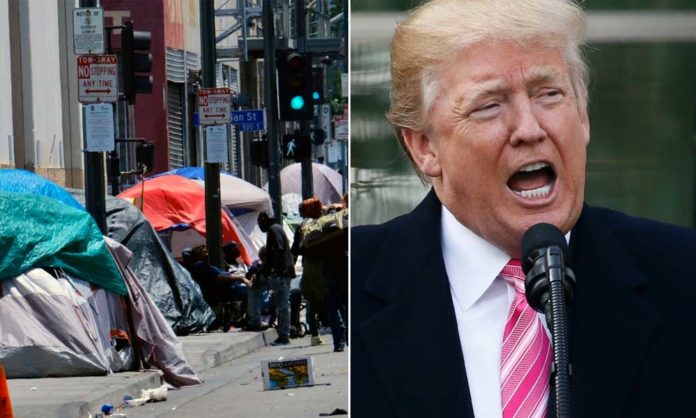 On Tuesday, President Donald Trump told reporters that the level of homelessness in California is unacceptable, but rather than offer compassion or real solutions for how to deal with the problem, he seemed to suggest that people who have no place to live are driving down property rates in cities such as Los Angeles and San Francisco.

Trump, who is in the Golden State for a two-day visit and fundraising event, held forth on Air Force One, remarking that homeless people often live in “our best highways, our best streets, our best entrances to buildings.”

As Common Dreams notes, Trump then went on to add:

“People in those buildings pay tremendous taxes, where they went to those locations because of the prestige.”

But the president was far from finished with his rant, continuing:

“In many cases they came from other countries and they moved to Los Angeles or they moved to San Francisco because of the prestige of the city, and all of a sudden they have tents. Hundreds and hundreds of tents and people living at the entrance to their office building. And they want to leave. And the people of San Francisco are fed up, and the people of Los Angeles are fed up. And we’re looking at it, and we’ll be doing something about it.”

Trump also alleged that police officers in cities with high concentrations of homeless people are “getting sick” because they have to interact with the homeless:

“They’re actually sick. They’re going to the hospital. We can’t let that happen.”

Did President Trump suggest any solution to the problem? No. He merely hinted that his administration is looking a proposals to “address” the crisis of homelessness in California, “including more ‘policing,’ destroying encampments, and moving homeless people to government-run facilities.”

Diane Yentel, president and CEO of the National Low Income Housing Coalition, was not impressed with Trump’s remarks, telling the Washington Post:

“The president’s remarks are abhorrent. He’s apparently more concerned with the doorways and streets than with the people who are homeless and sleeping on them.”

“It’s an abomination that homelessness exists in the United States, not that rich businessmen are annoyed by poor people.

“That’s right, it’s not that it’s uncomfortable to ‘look at. Homelessness is a life-threatening crisis for anyone experiencing it, and it happens to adults, to the elderly, to families, to young people, and to children. It’s unacceptable, and we have to do more.”

2: Homelessness isn’t vagrancy, it’s the inevitable result of systemic, institutionalized policy failures by every level of government over the course of centuries. It’s systemic racism, inequity, & intentional decisions to help the rich at the expense of everyone else. 5/14

But perhaps Ms. Yentel had the best comeback to Trump, reminding him that homelessness can be alleviated by helping those who need housing, not turning them into criminals or verbally attacking them:

“The solution to homelessness is affordable homes, not further criminalization, punishing poor people for their poverty, sweeping people experiencing homelessness into increasingly unsafe areas, or warehousing people in untenable and unsustainable conditions.”

Instead of building a wall or more nuclear weapons, why don’t we try building safe, affordable homes for every American? That would be an investment in this country that would pay real dividends for all of us.