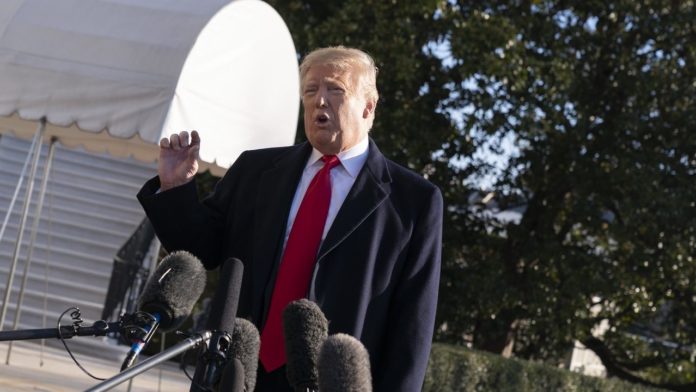 President Donald Trump said Sunday that he could fully “relate” to federal workers who won’t be getting a paycheck on January 11. And he managed to do so without laughing.

Stopping briefly to speak with reporters before he boarded Marine One for a trip to Camp David, Trump repeated his demand for billions of dollars to construct a wall on the Southern border.

After his monologue, the president was asked by NBC News White House correspondent Kelly O’Donnell:

“Can you relate to the pain of federal workers who can’t pay their bills?”

My question to the president, “Can you relate to the pain of federal workers who can’t pay their bills?” Pres. Trump:”I can relate…”. Watch: pic.twitter.com/WJCBHZQ15x

When asked about federal workers who are reportedly calling in sick in protest of not receiving their pay, Trump commented:

Of course, it’s hard to know what to make of anything this president says. For years, he swore his border wall would be constructed out of concrete. But in recent weeks, Trump has suggested steel slats might be acceptable. On Sunday, he again touched on the matter of what material would be used if he manages to extort $5 billion from Congress:

“The barrier or the wall can be of steel instead of concrete if that works better.”

Trump’s claim that he can relate to not being paid was met with derision on social media:

I can relate because I drove my casinos into bankruptcy and no bank would lend me any more money so I had to make a deal with Russia.

He can relate in the sense that he doesn’t pay his bills…..but it’s not the same as being unable to pay bills. I don’t expect him to know the difference.

Actually I think there might be a shred of truth here. I don’t believe Trump is as wealthy as he’s made people believe. I think there has been times when he’s been desperate for cash. The difference? Federal employees don’t have access to Russian or German bankers…

What “adjustments” are we supposed to make? Not eat? Sit in the dark with our power off? 😡

Adjustments include, parents skipping meals so there’s enough for kids, butter sandwiches, spam, powdered eggs & milk, borrowing $5 for gas, losing a home a car, being grateful kids were in school for a free lunch. Wonder what his struggle was like?

Trump: Not the first time I’ve stiffed workers, believe me! Nobody knows their pain like I do! I’ve caused it many times!