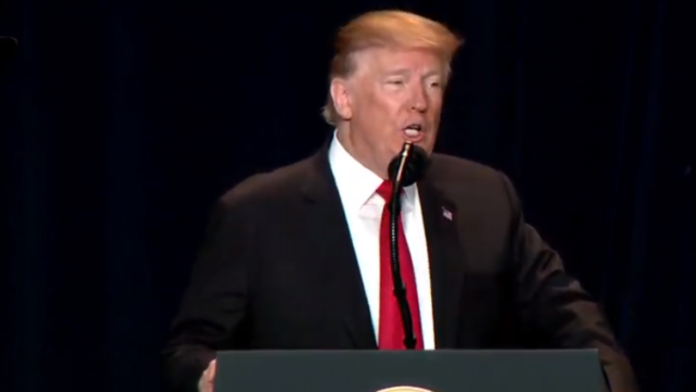 UPDATE: Fact-checkers have labeled this story false. In an effort to be accurate on all things, we are acknowledging that the original story is hyperbolic and not up to our standards of accuracy and fact. We apologize for any inconvenience.

On Wednesday, the shallow, bitter little man who serves as the current president decided to attack a deceased American hero, former Arizona Senator John McCain, even going so far as to suggest that McCain might have gone to hell for not casting his vote to destroy Obamacare.

During a speech he made at the Faith and Freedom Coalition, President Donald Trump remarked:

“We needed 60 votes. And we had 51 votes. And sometimes, you know, we had a little hard time with a couple of them, right? Fortunately, they’re gone now. They’ve gone on to greener pastures. Or perhaps far less green pastures, but they’re gone… I’m very happy they’re gone.”

Trump’s audience is stunned as he says this, alluding to McCain: “We needed 60 votes & we had 51, & sometimes we had a hard time with a couple. Fortunately they’re gone now. They’ve gone on to greener pastures. Or perhaps far less green, but they’re gone. Very happy they’re gone” pic.twitter.com/KK698FkAeZ

He’s glad they’re gone. What’s next? Is he planning to go to McCain’s grave and spit on it? Sadly, we can all imagine Trump would do something that despicable, and most Republicans would probably give him a standing ovation. That’s how utterly depraved the modern-day GOP has become.

Trump cannot get over the fact that McCain voted his conscience and refused to take health insurance away from 20 million Americans. He’s furious that he wasn’t able to convince or threaten a U.S. senator to do what he wanted. In other words, Donald Trump was proven to be a loser at that moment, and since he cannot accept blame, he has to try and attack a dead man to explain why he wasn’t able to destroy the Affordable Care Act, which he hates with a passion because it has Barack Obama’s name attached to it.

Just when we think that Trump cannot possible be a more disgusting excuse of a human being, he lowers the bar again. It’s one of a myriad of reasons he needs to be removed from office.