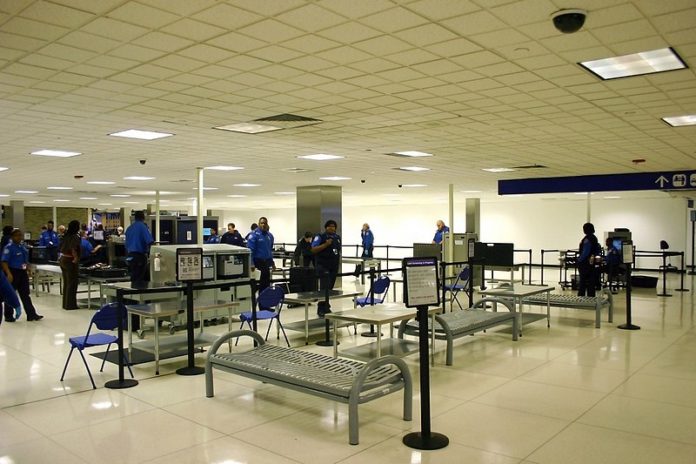 President Donald Trump’s administration is trying to silence the Transportation Security Administration (TSA) personnel from admitting that our airports are less secure because of the government shutdown.

When a man carried a gun successfully through a TSA checkpoint earlier this month and boarded his plane to Japan, it set off alarm bells over just what could become common if the government shutdown continues to drag on as TSA agents continue to stop coming to work because they are not being paid.

Trump’s shutdown is entering its fifth straight week, and hundreds of thousands of federal workers are not being paid, resulting in many call outs from employees so they can try to find other work to pay the bills.

The impacts could compound the longer the shutdown lasts, union officials say. Those manning the security checkpoint can be demoralized by the lack of pay, or exhausted and less sharp from covering extra shifts, according to union officials who are also employed by TSA. With insufficient staff, managers may open fewer security lanes, causing lines to grow longer and move more slowly. New recruits cannot be hired or trained without funding.

“The loss of officers, while we’re already shorthanded, will create a massive security risk for American travelers since we don’t have enough trainees in the pipeline or the ability to process new hires,” Thomas said in a statement on Monday.

Trump claims to want a wall because it will somehow stop terrorists (it won’t), but the worst terrorist attack on U.S. soil occurred on September 11, 2001, because terrorists were able to bring box cutters aboard multiple planes and hijack them.

Without proper security personnel, it’s only a matter of time before potential terrorists are able to sneak weapons on planes because there are not enough TSA agents to process passengers effectively.

But the Trump administration would rather the public not be informed of just how unsafe airports are becoming because of the shutdown, which is why TSA’s deputy assistant administrator for public affairs, Jim Gregory, sent an email to TSA management telling them not to talk about call out data and to insist that airports are perfectly secure.

“You can engage with media and address topics that touch your workforce such as how they are doing overall but there are some areas you can’t address,” the email says according to a CNN report. “Do not offer specific call out data at your airport. You can say you have experienced higher numbers of call-outs but in partnership with the airport and airlines you are able to manage people and resources to ensure effective security is always maintained.”

“We consider call out numbers to be sensitive and are not releasing them publicly because we believe adversaries could use the information to exploit perceived vulnerabilities,” Gregory said, admitting that people who want to kill us can exploit the government shutdown to get past security or rather, the lack thereof. “Additionally, call out numbers don’t tell the whole story since it’s more about whether FSDs are able to properly staff checkpoints. Regardless, we want to ensure people know security will not be compromised at TSA and we will maintain security standards.”

But it’s already being compromised, and winter is the slowest travel time of the year. What’s going to happen when summer arrives and Trump’s shutdown drags on for the months or years he has warned it will last? More TSA personnel are going to quit because working for no pay is slavery and does not keep food on the table or a roof over their kids’ heads.

It’s that simple. And potential threats are going to take advantage of that regardless of whether or not TSA agents reveal specific call out information. Callouts have already doubled compared to last year and will undoubtedly rise as the shutdown continues.

Trump’s little temper tantrum is making Americans less safe at airports across the country, and any terrorist attack by plane because TSA did not have the personnel to do their job is on him, and him alone. Trump should be concerned about the terrorists who are going to board planes, not the non-existent ones he claims are crossing the border.