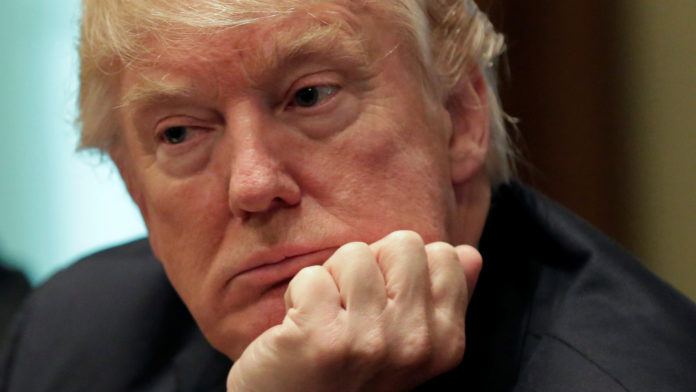 With Democratic challengers lining up to run against him in 2020, President Donald Trump is spending large parts of his workday trying to think up hateful nicknames for the growing Democratic field and fretting that a slowing economy will destroy his already narrow shot at being re-elected, according to a new report from Politico.

Trump seems obsessed with 2020, even though the election is a year and a half away:

“’He talks a lot about it,’someone who knows Trump told us. ‘With Trump, everything is personal. So for Trump, a lot of the day is spent trying to assess the weaknesses of the other candidates.’

The president is ‘not necessarily’ watching any particular candidate, a senior administration official said — ‘occasionally he’ll comment on one or another, Crazy Bernie, Sleepy Joe’ — though his intense Twitter focus on Biden in recent days suggests otherwise.”

Much of the president’s time is spent trying to come up with nicknames for the Democratic candidates:

“’Trump believes that if you can encapsulate someone in a phrase or a nickname, you can own them,’ the person who knows Trump explained. ‘Low-energy Jeb, Little Marco — that kind of s— really diminishes people and puts you in control of them, and that’s what Trump is a genius for doing.'”

The Trump re-election team believes the 2020 election will come down to four key battleground states, which could be very bad news for the president:

And what worries Trump most is that the Federal Reserve’s refusal to cut interest rates the way he wants could spell doom for him:

“But ultimately, the person close to Trump said, he’s more worried that his great run of economic news might run out: ‘The president looks at it as his main threat is the Federal Reserve.'”

Economists are already predicting a recession as soon as later this year, or certainly by 2020, and that may wind up being what gives the White House back to Democrats.