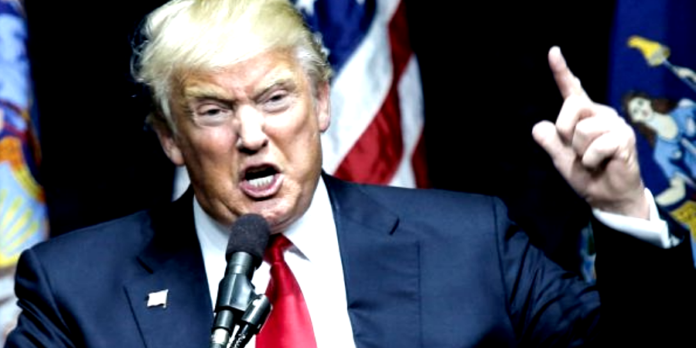 During the event, Trump accused the FBI and Democrats of treason by falsely claiming they spied on his campaign as his supporters chanted “lock them up.”

“They were spying on our campaign,” Trump claimed. “I’ll tell you what — if that ever happened to the other side, this thing would’ve been over two years ago, and you know, it would have been treason. They would’ve called it treason. And that’s what it is — it was treason. And it should never be allowed to happen to another president again. Ever, ever, ever.”

He then bragged about having Attorney General Bill Barr carrying out his weaponization of the Justice Department.

“Well, we have a great new attorney general who is going to give it a very fair look,” he said.

Then Trump mused about being kept in power for far more than two terms, which would violate the 22nd Amendment of the Constitution.

“We ran one time and we’re ‘1-and-0’ — but it was for the big one,” he said. “Now we’re going to have a second time. And we’re going to have another one. And then we’ll drive them crazy. Maybe if we really like it a lot — and if things keep going like they’re going — we’ll go and we’ll do what we have to do: we’ll do a three and a four and a five.”

Seriously, persecuting political opponents and trying to stay in power for life is precisely what fascist dictators do.

Many observers certainly noticed and voiced their concerns on Twitter.

This could be a rally in Nuremberg circa 1935: https://t.co/XmjJ9MNk5B

@SpeakerPelosi @TeamPelosi I would be pleased to speak to you as an expert on how authoritarian regimes take hold, with this as a warning sign. https://t.co/R4osfsovfd

Trump tells his political rally that his Attorney General is carrying out his command to investigate his political opponents for committing treason.

Whatever he thinks he means by this, it is now seen as ordinary, routinized conduct by this president, and that can’t be okay. https://t.co/AiyRXM646O

US President publicly stating HIS Attorney General will go after his polical opponents, both real and imaginary, for treason. Which carries the death penalty. Not. A. Drill. https://t.co/5B7zgpJaIY

They were large Nazi propaganda events, especially after Adolf Hitler’s rise to power in 1933. These events were held at the Nazi party rally grounds in Nuremberg from 1933 to 1938 and are usually referred to in English as the “Nuremberg Rallies”

This is a true national emergency and must spur Democrats to start impeachment hearings. Trump is too dangerous to put impeachment off until after 2020. By then it would be too late, especially if Democrats lose the House. Now is the time to act in defense of democracy and the rule of law before we lose both and America becomes the modern-day Nazi Germany that Trump and his supporters want it to be.