The United States Blues
Home National News Trump’s tells young Republicans ‘I have the right to do whatever I... 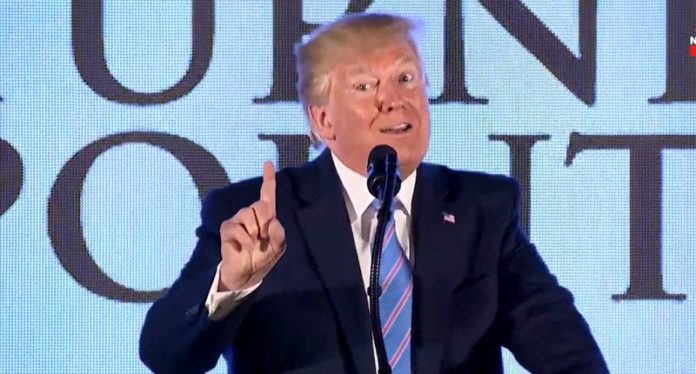 On Tuesday, President Donald Trump addressed Turning Point USA, the nation’s largest group of college Republicans, and spewed a soupçon of hatred and lies, including a claim that Article II of the U.S. Constitution gives him unlimited powers to do as he pleases.

But as HuffPost reports, that wasn’t all Trump had to say about the four congresswomen. He then fired off one lie after another:

The president repeatedly lied about the congresswomen, saying they “talk about ‘evil Jews’” and “say horrible things about Israel” with “venom and hatred.”

He falsely claimed that Ocasio-Cortez “calls the people of our country and our country ‘garbage’” (as the Raleigh News & Observer reported, she said something else completely).

There was also a claim by the president that voting in California is “rigged” against him.

And then came the riff about how powerful he is as president:

“I have an Article II, where I have the right to do whatever I want as president.”

No. He most certainly does not have the right to do whatever he wants as president. As Newsweek rightly points out:

Although the loosely-defined “Article 2” is interpreted by some as granting the chief executive broad authority, the section also provides for a president’s removal from office via “impeachment for, and conviction of, treason, bribery, or other high crimes and misdemeanors.” The latter offers an explicit check on the president’s authority and actions, which negates Trump’s claims that he has the “right to do whatever” while in office.

It seems to be more than coincidence that Trump made his statement about doing whatever he wants the day before former Special Counsel Robert Mueller testifies before two House committees.

No president has unlimited, unchecked power. The day an American president is allowed to have such power is the day we cease to be a democracy and become a dictatorship.