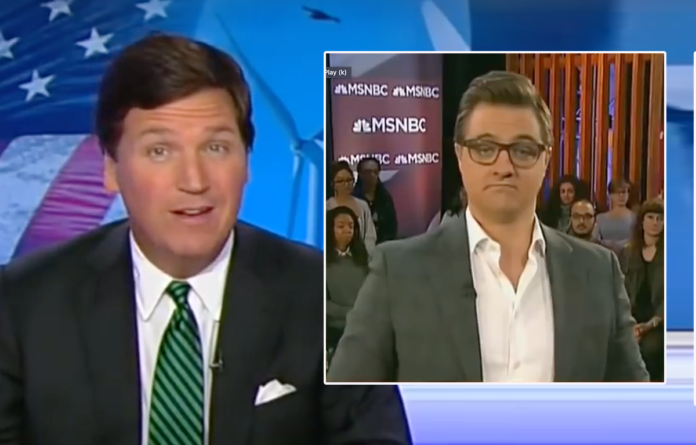 Fox News host Tucker Carlson is still on the air and totally unapologetic even after a radio interview surfaced where he defended a child rapist. One would think Carlson would not want to talk about morality in the light of such news but he questioned the moral authority of Rep. Alexandria Ocasio-Cortez (D-NY) and attempted to insult MSNBC host Chris Hayes. The scathing rebukes of Carlson’s comments on Twitter, including from Hayes’ colleague, Stephanie Ruhle, have been immediate and overwhelming.

Carlson’s comments came after he examined the town hall event hosted by Hayes to talk about the Green New Deal with Ocasio-Cortez. Carlson calls the plans to seriously address climate change, “idiotic climate theology,” equating belief in science to a religion.

The sardonic Fox host compared Hayes to talk-show host Ellen and attempted to insult him for being apologetic, something he refused to do. He then tried to insinuate that any concern over climate change is only important to feminists. Interestingly, Carlson seems to believe feminists blame climate change on the patriarchy and not on the actual causes such as the fossil fuel industry.

“Chris Hayes is what every man would be if feminists ever achieved absolute power in this country: apologetic, bespectacled, and deeply, deeply concerned about global warming and the patriarchal systems that cause it,” Carlson said of the All In host.

MSNBC host Stephanie Ruhle leveled the hammer on Carlson, pointing out the obvious flaws in his remarks. Chris Hayes is everything Tucker Carlson could never hope to be:

Who wants to live in a world with a bunch of those dudes? https://t.co/ZK31MIcRpQ

Journalist and political staffer, Judd Legum, pointed out that Carlson appears to be throwing stones from a delicate glass house.

One way you know Tucker Carlson is super confident in his masculinity is how much time he spends talking about how other men aren’t masculine enough https://t.co/WYMYzhn74j

Author, Molly Jong-Fast noted how Carlson’s attempted insult only pointed out his problem with strong women.

And the worst putdown Tucker Carlson could cook up was “liked by feminists.” https://t.co/3fNuxiygxs

Editor, Brian Krassenstein pointed out that Carlson pales in comparison to a man like Chris Hayes.

Chris Hayes is everything Tucker Carlson wishes he could be. @HillReporterhttps://t.co/XIGW0ln7sm

the weirdest thing about tucker carlson is that he thinks he's an alpha male https://t.co/PxON02ncXv

Carlson also managed to call Ocasio-Cortez a “moron,” ignoring the irony that she called out a person in the audience for insulting Rep. Bob Inglis (R-SC) as a “moron.” She said the insult was “unacceptable.” Carlson believes she is insulting when she calls out the Tea Party as based in white supremacy and xenophobia. The basis for her comments come from factual reports, not gratuitous Ad hominems.

Now that Hillary is not in the public eye as much, Ocasio-Cortez has become the new favorite target of the right-wingers, but what are they so afraid of? That we might have a society that values diversity and is opposed to the rule of greed and fear?

“In my framework, in my belief, we not just have a wealthy society, but that we have a moral society,” said Ocasio-Cortez.

Carlson called her “nasty” and “more self-righteous than any televangelist who ever preached a sermon on cable access.” He then suggested she had no moral authority based on her age and on not having birthed any children.

“Wait a second! You may be wondering. How does a member of Congress who hasn’t yet turned 30, someone who has never even raised children get the right to lecture me on morality?”

Surprisingly, Carlson goes on to actually find common ground with Octavia-Cortez on the “growing corporate tyranny in this country.” However, Carlson disagrees completely on how to diminish control of said corporate tyranny, stating that the Green New Deal would only “increase the power of the Democratic party.”

Instead, partisan attacks and insults are the road to dissolving the oligarchy?

Carlson, as usual, has an unimaginable nerve in attacking Chris Hayes and insulting Ocasio-Cortez. Yet these insults are merely more distractions from the need to seriously address climate change, an important subject that Republicans can only punt or ignore. Every time they chose to do so, they strengthen the growing corporate tyranny in America. That is truly a moral failing, not just for America, but for the world.

At the end of the day, we can all take some relief in knowing that another MSNBC host is surging ahead of Carlson in the ratings: Rachel Maddow. In the end, the facts will win out.

For all of the attacks the right makes against Rachel Maddow, it turns out she just passed Tucker Carlson in ratings.@hillreporterhttps://t.co/qHFlkpvVcV

See the interview below: