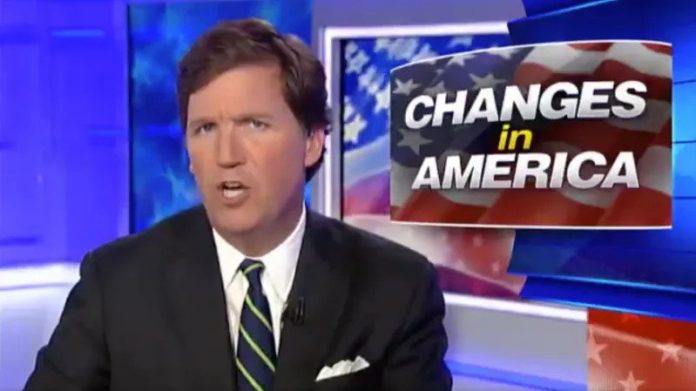 Fox News host Tucker Carlson must be auditioning to be the next chief of staff for President Donald Trump with the disgusting comments he made about immigration Thursday evening.

In a rant on the subject of allowing immigrants into the United States, Carlson proudly declared:

“Our leaders demand that you shut up and accept this. We have a moral obligation to admit the world’s poor, they tell us, even if it makes our own country poorer, and dirtier, and more divided. Immigration is a form of atonement.

“Previous leaders of our country committed sins — we must pay for those sins by welcoming an endless chain of migrant caravans. That’s the argument they make.”

Then Carlson alleged that members of the migrant caravan from Central America are only interested in money:

“What is more predictable is how leaders of the caravan are starting to talk. Suddenly, they sound like community college professors from Long Beach. Entitled, cut off from reality, and highly aggressive.

“Yesterday a group of leaders of the caravan marched into the U.S. consulate in Mexico, and demanded $50,000 to return to their own countries.”

Carlson concluded his angry diatribe by trying to take the words etched on the Statue of Liberty and pervert them for his own cynical purposes:

“Huddled masses yearning to breathe free? Nope, cynical shakedown artists who have been watching too much CNN.

“No surprise there. When rich liberals tell you that America owes you a comfortable life, nobody should be shocked when you believe them.”

What Tucker Carlson, Donald Trump, and so many of their ilk neglect to mention is that were it not for immigration, the vast majority of us would still be stuck in the nations we and our predecessors were born in. They came seeking opportunity and freedom, but suddenly right-wingers want to slam the door and keep America as it is. In other words, they don’t really want to “make America great again.” They just want to keep America white. How’s that for “dirty”?