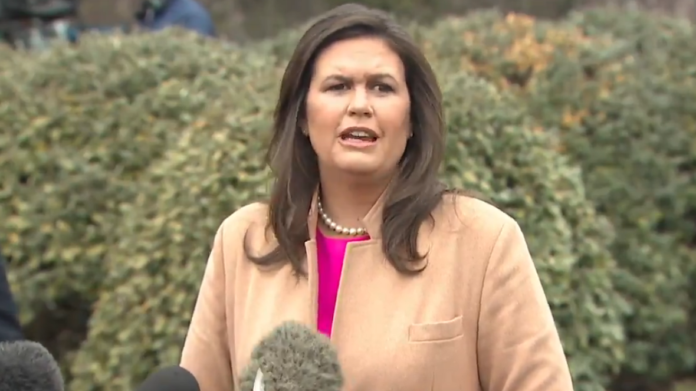 Standing on the White House lawn, Sanders was asked why Trump has yet to condemn a Coast Guard lieutenant who was arrested this week for planning a domestic terror attack on Democratic lawmakers and members of the media. As NPR reported Wednesday:

“A 49-year-old Coast Guard lieutenant charged with stockpiling weapons and drugs is being described as a ‘domestic terrorist’ who was planning ‘to murder innocent civilians on a scale rarely seen in this country,’ according to court documents filed in U.S. District Court in Maryland on Tuesday.

But Sanders insisted that her boss has always condemned violence in any form:

“I certainly don’t think that the president, at any point, has done anything but condemn violence. In fact, every single time something like this happens, the president is typically one of the first people to condemn the violence.”

After arrest of Coast Guard lieutenant, who allegedly amassed weapons and compiled list of Democratic lawmakers and journalists, Sarah Sanders says Pres. Trump hasn’t “at any point” done anything “but condemn violence, against journalists or anyone else.” https://t.co/vD1SnbtLMf pic.twitter.com/JO6LCpexIm

That was all it took for Twitter to light up with reminders for the press secretary that Donald Trump has often encouraged violence, especially against those who disagree with him:

Because repeatedly saying “the press is the enemy of the people” is actually his way of telling people to go out and hug the media and show them respect. He is riling people up and taking no responsibility for his actions. He’s pathetic.

She holds a PhD in gaslighting.

Except when he’s telling people to punch them and he’ll cover their legal fees.

At every rally, he points to the press pool and calls them an enemy. He tweets that they’re the enemy of freedom, which is potent in this climate. That doesn’t look like condemning violence. It looks like creating the conditions for it.

“Enemy of the people” is such a warm a cuddly term.
Hard to believe anyone would be confused by it.

Donald Trump has built his political career on lies, hatred, and fear. To suggest otherwise is so disingenuous and ridiculous that Sarah Sanders’ nose should have grown six feet long the minute she uttered it.