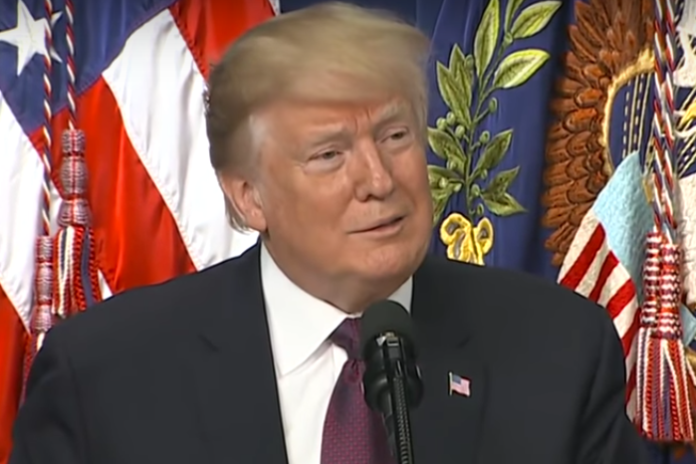 President Donald Trump is now kissing up to veterans after a week in which he refused to honor fallen American soldiers because of rain on Veteran’s Day weekend.

During remarks on Thursday afternoon at the White House, Trump had the gall to speak about “sacred duty” and claimed that he honors those who wear the uniform.

It is our sacred duty to support America’s Service Members every single day they wear the uniform – and every day after when they return home as Veterans. Together we will HONOR those who defend us, we will CHERISH those who protect us, and we will celebrate the amazing heroes… pic.twitter.com/kovcIj4fwU

Of course, his words are worthless because of his actions over the last week.

While he was in France to mark the 100th anniversary of World War I, Trump deliberately skipped a ceremony honoring American troops who died during the Battle of Belleau Wood all because it was raining outside.

Instead, leaders from other nations honored our troops, and Trump spent his day rage tweeting and watching television.

Then Trump did it again when he returned to the United States, electing not to attend a Veteran’s Day ceremony at Arlington National Cemetery. Once again, Trump disrespected those who gave their lives for this country, leaving it up to France to step in and do his duty for him.

And let’s not forget that Trump has repeatedly insulted veterans and their families over the last two years, including insulting the late Senator John McCain and attacking a Gold Star family. Trump even dodged the draft five times during the Vietnam War. He has no idea what it’s like to serve or to have a family member who served or is serving.

He wanted a parade for his ego, not our troops. He hasn’t done a thing for all the homeless vets or to do anything for the mess the VA is. He put 3 of his cronies from Mar a Largo in to head the VA. He couldn’t bother to make it to Arlington for Veterans day,all of a 10 min drive

Thanks. As a veteran I appreciate the words they finally squeezed out of you. Now if you really want to honor what we defended, please resign.

Donald Trump is an embarrassment to the Armed Forces, Veterans, the uniform, and the country. Calling you Commander-In-Chief is an insult to everyone who has, does, and will serve. #NationalEmbarrassment

What a pile of horseshit. Where were you on Armistice Day in Paris? Answer: meeting with Putie, your bro. Where were you when you skipped Arlington Cemetery? Answer: sitting on your fat ass in the WH. Representatives from France WERE there. YOU ARE A DISGRACE!

You embarrassed the USA and our military, don’t think for one second that we will ever forget that!! You ditched on them 2 times in France, once at home in Arlington, on our border and everyday in office that you have yet to address our active military troops at home and abroad.

I’m a Veteran, you don’t honor me, you don’t help me, you don’t look out for me. You simply invoke my name and the name of my Veteran Brothers and Sisters when it’s convenient. We are a means to an end. How long will service members be wasting their time at the border? Fuck you

Is it still our sacred duty even when it’s raining? Or does that only apply to golf.

Trump can’t claim that he honors the troops and then proceed to step on their graves by refusing to honor them at ceremonies because it’s raining. He can’t say he loves the troops and then use them for a political stunt at the border that will cost them the time they could be spending with their families on Thanksgiving.

Trump is unfit to be president and he’s a disgraceful Commander in Chief. He only cares about himself and he will continue using veterans as a prop to serve his purposes. This speech was one big lie. And it’s shameful.