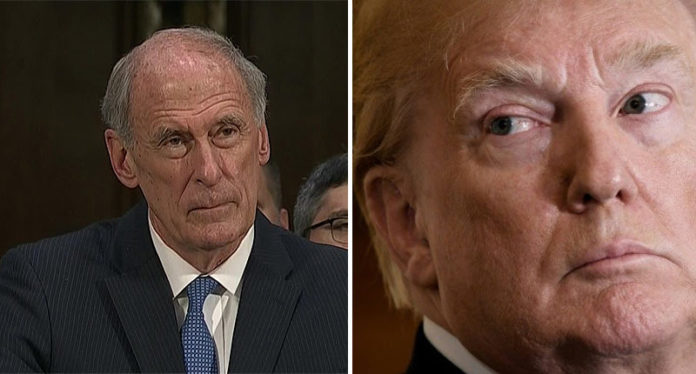 Back in December, President Donald Trump boldly declared that the terror group ISIS had been defeated and all American troops in Syria fighting ISIS would be immediately withdrawn:

….going to be there for three months, and that was seven years ago – we never left. When I became President, ISIS was going wild. Now ISIS is largely defeated and other local countries, including Turkey, should be able to easily take care of whatever remains. We’re coming home!

But according to Director of National Intelligence (DNI) Dan Coats, ISIS remains a threat and has not been destroyed. The Worldwide Threat Assessment released by the DNI Tuesday during testimony before the Senate Intelligence Committee warns that ISIS will continue to be a destabilizing force:

“ISIS will seek to exploit Sunni grievances, societal instability, and stretched security forces to regain territory in Iraq and Syria in the long term.”

Coats added that while ISIS no longer controls large swaths of land in the Iraq and Syria, it has “returned to its guerrilla warfare roots while continuing to plot attacks and direct its supporters worldwide.”

Perhaps most troubling was what Coats had to say about the total number of terrorist fighters loyal to ISIS:

“ISIS is intent on resurging and still commands thousands of fighters in Iraq and Syria.”

Thousands of fighters. That certainly doesn’t sound like a defeated terror army. And yet just last week Secretary of State Mike Pompeo was crowing about U.S. efforts that had “defeated” ISIS in the Middle East:

“It should not go unnoticed that we’ve also defeated the ISIS caliphate in Syria and Iraq alongside more than six dozen nations in the Global Coalition to Defeat ISIS.”

Trump’s withdrawal of U.S. forces from Syria is seen as a enormous gift to both Russia and Syria. Syrian President Bashar al-Assad is trying to crush any opposition to his tyrannical reign and Russia is hoping to further consolidate its influence in the region. Such a scenario could leave the United States with little to no influence in a part of the world that just so happens to contain most of the world’s oil supply.

At least 2,500 American troops remain in Syria, but are in the process of being withdrawn.