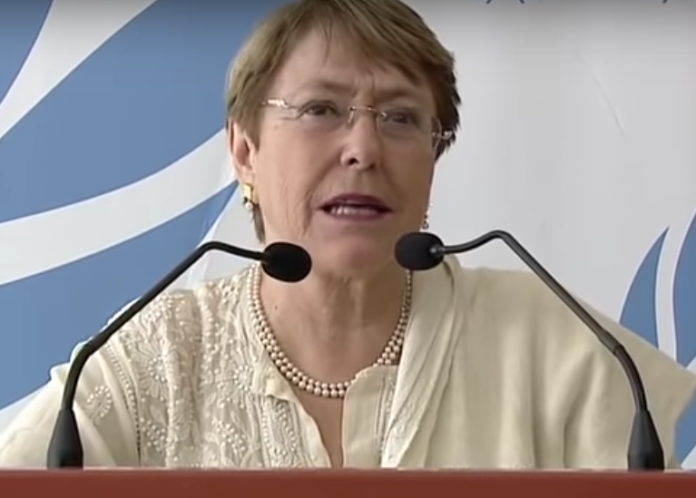 While President Donald Trump and conservatives continue to insist that Democrats and the media are lying about conditions inside his migrant camps at the border, United Nations Human Rights Commissioner Michelle Bachelet delivered her own analysis of the conditions.

The former Chilean president is a pediatrician, so she is uniquely qualified to assess the conditions at the camps, which have been documented by Rep. Joaquin Castro (D-Texas) on film and by disturbing witness accounts from other Democrats such as Rep. Alexandria Ocasio-Cortez (D-N.Y.) among multiple independent accounts.

Overcrowding is a major problem as is lack of food, medical care, hygiene products and proper sleeping arrangements as children are forced to sleep on the floor.

Bachelet confirmed that those conditions are the reality.

“As a pediatrician, but also as a mother and a former head of State, I am deeply shocked that children are forced to sleep on the floor in overcrowded facilities, without access to adequate healthcare or food, and with poor sanitation conditions,” Bachelet said, pointing out that detaining children “for short periods under good conditions can have a serious impact on their health and development.”

Trump claims accounts such as these are a “hoax” and says he will take the media on a tour of a facility. But such a trip will be nothing more than a facade as Border Patrol will make things temporarily perfect so that Trump can present a facility that is “proof” that everyone is lying about how his administration treats migrant children.

The problem is that Bachelet is an outside observer who has no reason to lie. Her medical expertise alone makes her an expert who is far more qualified than others to assess the conditions these children are dealing with. And that’s why she is urging more compassion for them.

“Consider the damage being done every day by allowing this alarming situation to continue,” she said, noting that families “have embarked on perilous journeys with their children in search of protection and dignity and away from violence and hunger.”

“When they finally believe they have arrived in safety, they may find themselves separated from their loved ones and locked in undignified conditions,” she concluded. “This should never happen anywhere.”

Clearly, Trump cannot be trusted. He lies all the time and you can bet that any facility he takes the media to will be staged. Once the media leaves, Border Patrol will go right back to treating these human beings like animals again.