The United States Blues
Home Elections Vapers could be the group that makes Trump’s reelection bid go up... 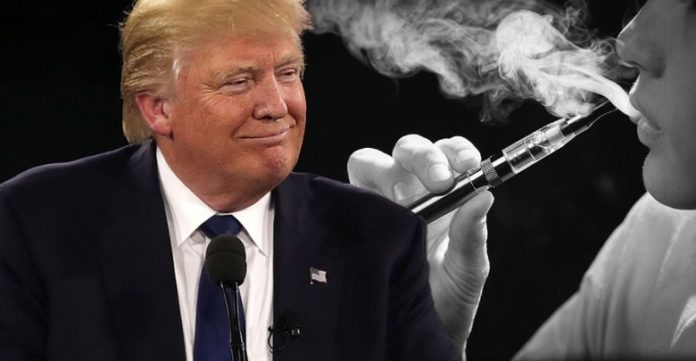 Two weeks ago, in response to reports of deaths from lung illness across the country related to vaping, President Donald Trump said his administration might ban e-cigarettes, noting:

“We may very well have to do something very, very strong about it. We can’t allow people to get sick. People are dying.”

Yet over the past few days, we’ve heard nothing from the White House on the issue of vaping, and Axios reports that’s because conservative leaders are warning that adult vapers will turn on the president if he moves to ban e-cigarettes:

“The data … reveals that the number of adult vapers in key battleground states greatly outweighs the margins by which Trump won those states in 2016 — and they argue it could cost him reelection.”

Paul Blair, the director of strategic initiatives at Americans for Tax Reform, commented:

“While parents may be concerned about e-cigarettes, the people who genuinely care about vaping as a voting issue so far outweighs the number of people Trump needs to win in 2020 that they are royally screwing themselves by doing this.”

However, if Trump backs away from his initial calls for a ban on vaping, it would be the second time in recent weeks that he’s reversed himself on an issue of public health. The president said earlier this summer that he was open to the idea of expanding background checks for gun purchases, but later backed down on that when the NRA warned him not to pursue such a policy.

Axios notes that the case being presented to Trump by pro-vaping advocates goes like this:

A loss of a few thousand voters could prove especially risky in states Trump carried by the narrowest of margins in 2016. Namely, Michigan, Pennsylvania, and Wisconsin.

While it seems unlikely that Trump will call for a total ban on e-cigarettes, he also has to try and balance the health concerns of voters — especially suburban women — who are already unhappy with much of the president’s agenda. It’s the kind of balancing act he’s yet to show he has the ability to master.