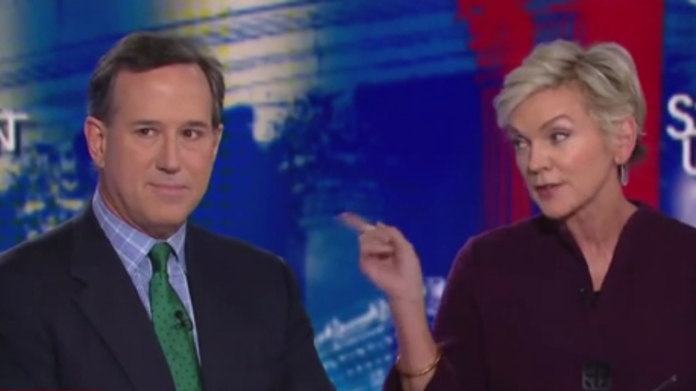 Former Pennsylvania GOP Senator Rick Santorum tried to have it both ways while discussing the fact that President Donald Trump has again been named as an unidicted co-conspirator in sentencing memos filed this week, but he quickly got his head handed to him by the former Democratic governor of Michigan, Jennifer Granholm.

Santorum and Granholm were guests on the CNN Sunday show “State of the Union,” and Granholm noted that five people who were close to the 2016 Trump campaign have now been indicted:

“This is like a confederacy of liars. And of course, Trump being the primo of them all, given the volume of lies that he’s told since he’s been president.

“Bob Mueller is there putting his flag in the ground for truth. He is bringing truth and honesty and nobility and integrity back.”

“If you look at the other two impeachable offenses happening in modern times. There was a crime under Richard Nixon… and then there was a crime [under Bill Clinton]. Whitewater.”

But Granholm was ready for Santorum, reminding him:

“But that’s not why he was impeached.”

“So far, there is no evidence that there was a crime. If this investigation produces ‘a crime’ as he paid off a stripper, as that’s the basis of all of this?

“There’s no major crime here. At least, certainly not for the thrust of the investigation.”

Granholm shut down Santorum by reminding him that he had voted to impeach Bill Clinton for far less:

“When you were senator, you voted in favor of impeaching the president, Bill Clinton, on the basis of a lie. It was about his personal conduct. It wasn’t about Whitewater.

“Be careful about history.”

What Santorum and other Trump apologists forget is that we now have evidence that Donald Trump ordered his attorney to commit felony fraud by paying off women in the closing days of the 2016 presidential race. Not only is that unethical, it’s also a crime and no one — not even Trump — is above the law.