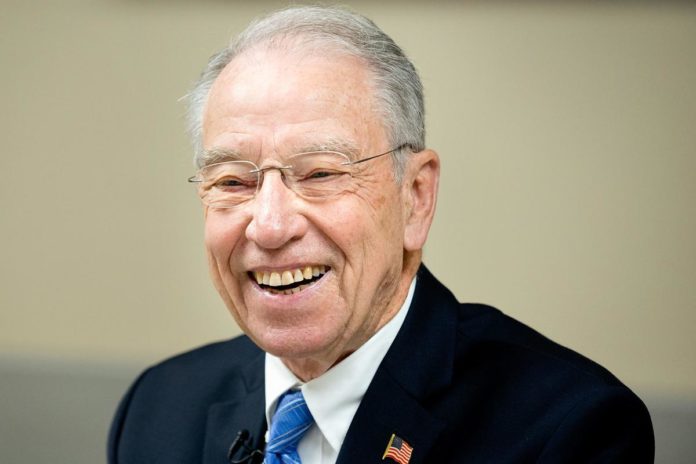 Iowa GOP Senator Chuck Grassley laughed at and mocked one his constituents at a town hall meeting recently in the Hawkeye State simply because she said she feared she might lose her health insurance if Republicans ever succeed in repealing the Affordable Care Act, which is more commonly known as Obamacare.

Progress Iowa captured the exchange between Grassley and a voter, who asked the senator:

“What is your plan to keep millions of Americans like myself covered?”

As ShareBlue Media notes, Grassley was utterly dismissive of the woman’s concerns:

“In response, Grassley scoffed at her worries and falsely claimed that the health care law is not under immediate threat — even though Republicans have spent the last 9 years trying to kill the law enacted by President Barack Obama and the Democratic Party, and even though the the Trump administration is backing a federal lawsuit that would completely repeal the ACA.

“Grassley mentioned that lawsuit during his response to the voter’s question — but he dismissively claimed there’s no need to worry, because he doesn’t believe the courts will actually do what Trump wants and declare the ACA unconstitutional.”

The woman then reminded Grassley:

“You voted seven times to repeal [the ACA].”

Rather than respond and defend his vote, Grassley again tried to divert the discussion:

“Well, first of all, it’s not going to get repealed.”

When the woman again confronted Grassley, he leaned down directly into her face and sternly told her:

“The last time we voted for repeal was when McCain voted the other way, and there’s no chance of repealing it now.

“Besides, if we pass it in the Senate, we wouldn’t get it through the United States House of Representatives. So what are you worried about?”

What she’s worried about, Senator Grassley, is that you and your GOP colleagues are going to take her health insurance away despite your promises not to. We’ve all seen this movie before. Republicans claim they want everyone to have affordable health care, then they turn around and vote to strip it away from tens of millions.

On the issue of health care and health insurance, no Republican can be trusted. Not now and not ever.