The United States Blues
Home Politics Congress William Barr made major donations to Senate Republicans shortly before he was... 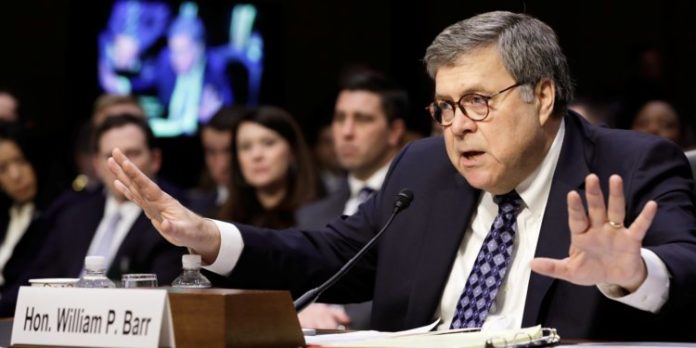 Shortly before he was confirmed as attorney general in late 2018, William Barr made $51,000 in political contributions to the committee that helps elect Republicans to the United States Senate, according to a new report from Quartz:

In the lead up to his Senate confirmation hearings for attorney general earlier this year, his giving habits suddenly changed. Barr’s donations became far more frequent, notable for their size, recipients, and possible utility to him. In total, Barr gave $51,000 to the National Republican Senatorial Committee (NRSC)—a group that raises money to help elect Republicans to the Senate—in the months leading up to the Senate’s confirmation of his nomination.

More suspiciously, Barr began ramping up his contributions to the NRSC around the same time former Attorney General Jeff Sessions seemed to be on shaky ground with President Donald Trump and was believed to be on his way out at the Department of Justice:

He donated on a schedule, providing $10,000 every month to the NRSC, on the third of the month, starting in October. That continued until he was confirmed on Feb. 14, 2019, just 11 days after his last contribution.

Though the contributions didn’t violate FEC rules, they should “raise eyebrows” according to Adav Noti, a senior director at the nonprofit, nonpartisan Campaign Legal Center in Washington DC, a campaign finance watchdog:

The donations also suggest there may have been some sort of quid pro quo in mind when Barr made them, Noti added:

“Maybe it’s a coincidence. Maybe not,” Noti says of the timing and sums. But as long as there was no implicit or explicit quid pro quo, no exchange for an official act—and there is no evidence here that Barr expected or was promised anything in exchange for his donations—there is no legal issue with the contributions. Still, Noti said it is “a flaw in the system” that such large and targeted contributions are permitted.

Barr has used the issue of political contributions to suggest that members of Special Counsel Robert Mueller’s investigative team had partisan political motives because they had made donations to Democratic candidates:

In 2017, he spoke to the Washington Post about the prosecutors former special counsel Robert Mueller was hiring as part of his investigation into Russian meddling in the US election and the president’s efforts to thwart that investigation, some of whom had contributed to Democratic causes. “In my view, prosecutors who make political contributions are identifying fairly strongly with a political party,” Barr said.

Clearly, Barr has given the appearance of impropriety by making such large contributions while his nomination was before the Senate and should recuse himself from any decisions related to Republicans or issues that would benefit the GOP. But we won’t hold our breath waiting for him to suddenly grown a conscience or a spine.