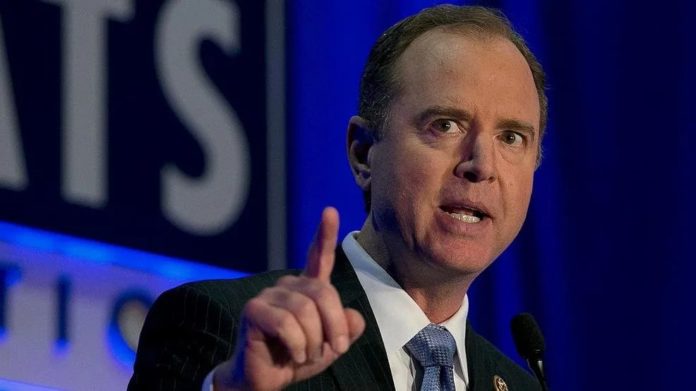 During an appearance on Fox News Monday night, Donald Trump Jr. tried to suggest that Rep. Adam Schiff (D-CA), chairman of the House Intelligence Committee, had leaked information about his testimony to that committee, telling host Laura Ingraham:

“YOU SAW IT RIGHT AFTER I DID MY TESTIMONY, AND THEY SAID, ‘OH, DONALD TRUMP JR. HAD THE WIKILEAKS INFORMATION,’ BECAUSE PRESUMABLY, ADAM SCHIFF LEAKED IT RIGHT AFTER MY TESTIMONY TO THEM, AND CONVENIENTLY TOOK OUT THE ONE BEFORE THE FOUR, TURNING THE 14TH INTO THE 4TH, MEANING I HAD IT SIX DAYS BEFORE THE WORLD SAW IT, AS OPPOSED TO FOUR DAYS AFTER THE ENTIRE WORLD SAW IT.”

But Schiff was more than equal to the specious charges leveled by the president’s son, telling CNN host Wolf Blitzer:

“What upsets Don Jr. — I can understand why he is upset — is he was saying, ‘I’m fully cooperating with Congress, I’m answering questions.’ Then he goes before our committee and refuses to answer a whole host of questions, making completely false claims of privilege. We called him out on it as we have done with other witnesses.”

Schiff also noted that it isn’t leaking to let the public know a witness has refused to cooperate:

“He calls that a leak because we exposed the fact that he refused to answer questions and was making up some attorney/client privilege to cover conversations between he and his father when neither is an attorney nor the client of the other. That’s his upset. That’s not a leak. It’s exposure of his non-cooperation and his stonewalling of our committee.”

And the California congressman added that he will continue to insist that those who testify under oath before his committee be truthful and transparent:

“So, they cannot mislead the public into thinking they are answering our questions. That is not only a practice that we have had, but also my colleagues in the GOP have from time-to-time used the same practice, for example, when Steve Bannon came in and stonewalled our committee. They were more than willing to go out publicly and say, he is not answering our questions. That’s been our practice both Democrats and Republicans. Don Jr. may not like it because he wants to maintain a facade of cooperation. That’s the reality.”

The intelligence committee with Congressman Schiff at the helm is not going to be a lapdog for the White House the way it was under the control of Devin Nunes (R-CA), who was only too happy to try and shield the administration from any serious oversight. Schiff is not about to let people come before his committee and lie with impunity. In other words, Rep. Schiff is going to do his job and let the chips fall where they may.