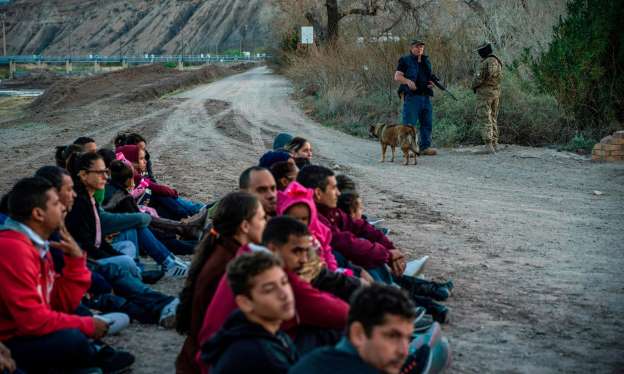 A group of heavily-armed vigilantes that call themselves the United Constitutional Patriots (UCP) recently apprehended hundreds of immigrants seeking asylum in the United States even though they have absolutely no authority to do so.

KEN5 out of San Antonio posted video of the group taking immigrants into custody with one of the so-called Patriots remarking:

After rounding up the migrants, the group turned them over to the custody of Customs and Border Protection (CPB)

An armed militia is rounding up immigrants in New Mexico and beyond the obvious implications I fear for every visibily latino individual who might encounter a group of this nature. The manhunt for these assholes should be national. pic.twitter.com/ghWZ7WqR93

The ACLU of New Mexico has demanded an immediate investigation into the group, which it called an “armed fascist militia organization,” writing in a letter to New Mexico Gov. Michelle Lujan Grisham and Attorney General Hector Balderas:

“The Trump administration’s vile racism has emboldened white nationalists and fascists to flagrantly violate the law.

“This has no place in our state: we cannot allow racist and armed vigilantes to kidnap and detain people seeking asylum. We urge you to immediately investigate this atrocious and unlawful conduct.”

Buzzfeed reports that the United Constitutional Patriots have “expressed support for President Trump and his effort to build a border wall.”

Asked for comment on the actions of the vigilante group, a spokesperson for Customs and Border Patrol told ThinkProgress:

“Interference by civilians in law enforcement matters could have public safety and legal consequence for all parties involved. Border Security operations are complex and require highly trained professionals with adequate resources to protect the country.”

Armed groups such as the UCP, however, are not trained or empowered to detain or arrest anyone for any reason, even of they are ex-law enforcement. They are clearly breaking the law, but we won’t hold our breath waiting for the Trump DOJ to prosecute any of them.