The United States Blues
Home News Democratic lawmaker says Matt Gaetz has one of most punchable faces in... 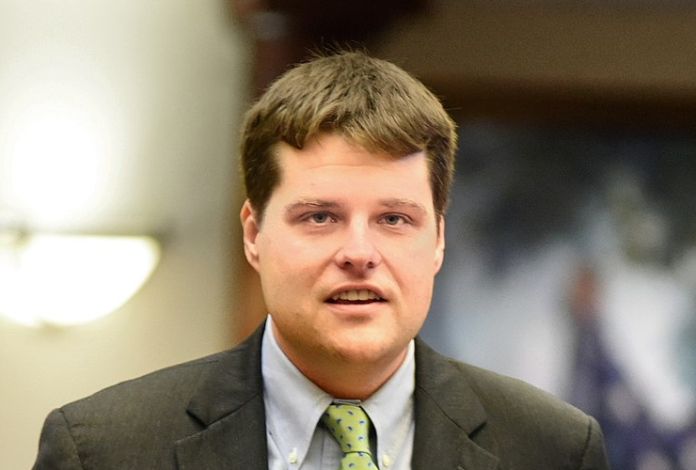 Rep. Matt Gaetz (R-Fla.) is now challenging Senator Ted Cruz (R-Texas) for the dubious title of the most punchable face in Congress, according to a Democratic lawmaker who spoke to The Daily Beast.

Gaetz has been making an ass of himself since arriving on Capitol Hill in 2016, mostly through his sycophantic defense of President Donald Trump, which reached such a poisonous height last week that he actually threatened Trump’s former lawyer Michael Cohen in a tweet that is likely going to be investigated by the House Ethics Committee.

Gaetz is totally in lockstep with Trump, even indulging in the same conspiracy theories and lies that have been debunked so many times one would think both men would have been ousted from office by now via impeachment or expulsion.

Unfortunately, many Republican lawmakers seem to think Gaetz is the future of the party.

Yeah, so “effective” that hardly any of his proposals get through Congress and hardly any of them would help his district. Instead, his bills are mostly about helping Trump, whose stance on climate change isn’t exactly helping Gaetz’s district, which includes Pensacola on the Florida coast, an area that could end up underwater in the near future.

“I should show you the texts from me and my brother every time he’s on TV,” a Democrat, who requested anonymity to speak freely, told The Daily Beast. “We rank him as one of the top two assholes in Congress. My brother said ‘he has the most punchable face in Congress.’ I said, ‘I thought Ted Cruz is still No. 1. He’s No. 2.’”

And Gaetz’s Republican primary opponent in 2018 believes the congressman is nothing but an embarrassment to the state of Florida.

“The thing about it is, you know, how do some of these funny stories start? ‘Florida Man,’” Cris Dosev said. “People here in Northwest Florida don’t appreciate being conjoined to crazy stunts and embarrassing events.”

No, they don’t. But Gaetz’s district sure does, apparently. He won re-election by over 30 points in November. But that was before Gaetz committed some serious ethics violations that include witness intimidation. We’ll just have to wait until 2020 to see if Floridians agree that one of the most punchable faces in Congress has to finally go.