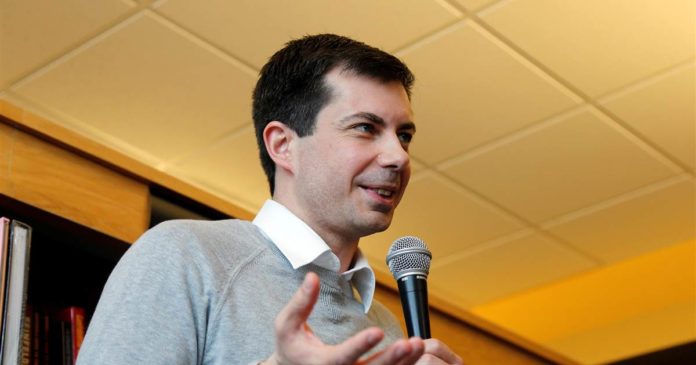 If there’s one thing we’ve seen from Pete Buttigieg in the early days of the 2020 race for the White House, it’s that he doesn’t shy away from talking about his religious beliefs, which he says are fundamental to how he views the world.

But while conservatives have often criticized Democrats for failing to address the issue of faith, many are now attacking Buttigieg for his expressions of faith, saying this his personal beliefs are empty and inauthentic.

Franklin Graham, the son of famous evangelical Billy Graham, said this week that any version of what he called “progressive Christianity” isn’t in line with Biblical concepts:

God loves us, & the Bible says we’re all sinners who need God’s forgiveness. We don’t define sin, God does in His Word. Using new terms like “Progressive Christianity” & “Christian Left” may sound appealing, but God’s laws don’t change. I believe what the Bible says is truth. 3/3

Robert Jeffress, pastor of First Baptist Dallas and an adviser to President Donald Trump, attacked Buttigieg merely because he’s gay, tweeting out this:

If Pete Buttigieg has problem w/@VP belief in traditional marriage, his quarrel is w/Jesus who said “From the beginning God made them male and female…For this cause a man shall leave his father & mother & shall cleave to his wife, & the two shall become one flesh (Matt. 19:4-5)

While it’s true that Buttigieg is indeed gay, he’s also happily married, whereas Trump has cheated on all three of his wives and was caught on tape bragging about how he enjoyed grabbing women “by the pussy.” Where’s the outrage from Jeffress over that?

I mean if Buttigieg thinks evangelicals should be supporting him instead of Trump, he fundamentally does not understand the roots of Christianity. But then he is an Episcopalian, so he might not actually understand Christianity more than superficially.

Jim Wallis, a progressive Christian and founder of the magazine Sojourners, says he’s firmly convinced that evangelicals are “terrified” of the debate in the religious community that has been sparked by Buttigieg’s remarks:

“They are afraid the new conversation about faith and politics, sparked by Mayor Pete Buttigieg, will get people looking and talking about the things Jesus said and did, and called us to

“That is a very dangerous conversation to let happen when you are a totally uncritical supporter of Donald Trump, a man whose life, behavior, morality, words, and policies are antithetical to the teachings of Jesus Christ.”